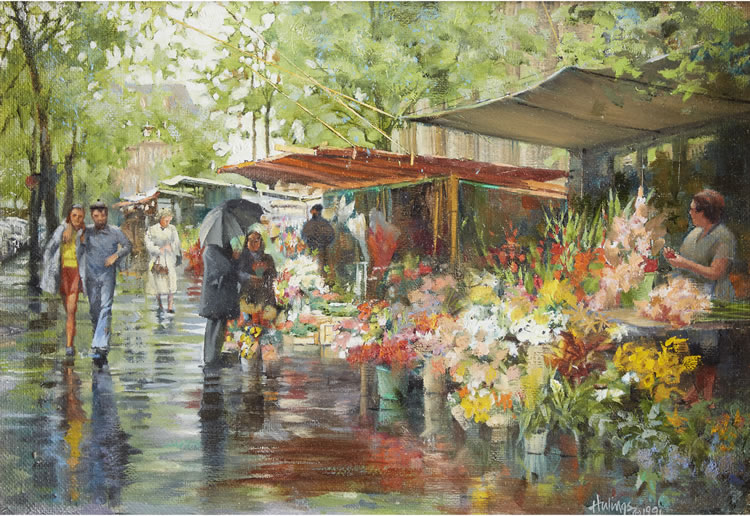 “This a rare chance to see a masterful artist’s agile mind at work: making decisions, playing, finding ways to engage the viewer’s eye.”

Today it’s raining, and we’re going to Paris. What could be more romantic? Boulevard de la Madeleine is one of the four grands boulevards of the city of lights: it’s named for the church, L’Eglise de la Madeleine, in the 8th arrondissement. Artists have loved this street for a long time: painter Edouard Leon Cortès (1882 -1969) has a series of works set there—one featuring the characteristic red awning of the flower market. There’s even a Moody Blues song complaining about being left lonely on this famous street in the autumn.

In the sketch, we see the development of the ideas for the second painting. Hulings is mapping out the values and the composition: the reflections on the wet pavement, the diagonal pull of the ropes for the tarps, the negative space of the gray sky behind the trees in the background, the bold use of reds in the flowers and awnings, and the yellow sweater of the woman walking by with her boyfriend on the left. The vendor on the far right holds a red flower, and she looks like she’s strategizing to engage the people walking by. Romance or no romance, commerce is the engine that keeps everything going in Paris.

Hulings made a handful of changes from the model to the final work: the purse of the white-haired woman in the classic trench coat is a sensible beige in the sketch but a bright blue in the next rendition. The man with the black umbrella is side-by-side chatting with a long-haired lady in the sketch, but in the next painting, they are face-to-face, and she is wearing a headscarf and it’s clearer that she’s working at the market. You may be able to spot a few more variations as well! In A Gallery of Paintings p 58, Hulings referred to himself as a “painter of the trial and error method” who worked through his ideas on the final canvas rather than iterating a series of sketches of models. As such, he did not often show his process to viewers of his work. When the piece was especially complicated or challenging, or occasionally when he created a sketch on the spot and then revisited it in a larger, studio piece, he would reveal himself. This a rare chance to see a masterful artist’s agile mind at work: making decisions, playing, finding ways to engage the viewer’s eye.

Update: Freeman’s Art Auction Philadelphia sold this 9 x 13″ gem on July 31st. Sending our congrats to the lucky collectors who welcomed this work into their home!

If you love Hulings’ French flowers and are in the market for a print that’s easy on the budget as well as the eyes, we have some beauties in the Hulings online store: Spring Flowers , Île de la Cité Flower Market, and Place des Ternes.