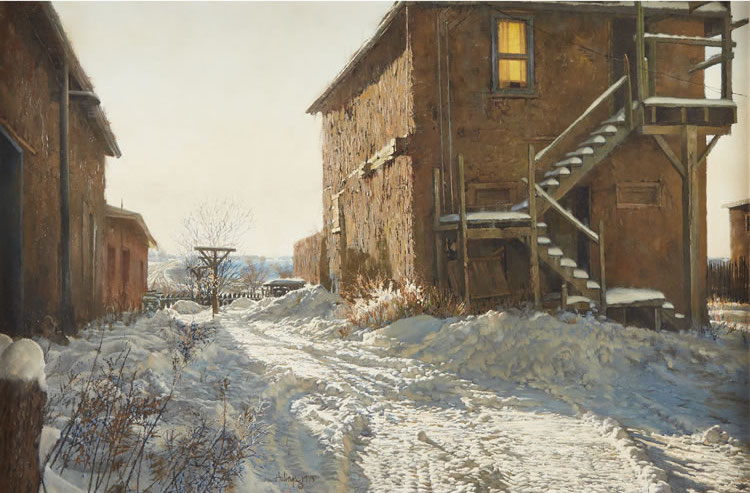 “At the first sign of snow in the forecast, he’d be excited to be out, gathering source material.”

If you’re in one of the many places in the world experiencing a summer heatwave, you may enjoy the chance to dive into a snow scene. The people in the New Mexican High Desert of Taos, however, might be laughing at our air-conditioners on blast while enjoying their cool summer. It’s a small perk given that it really does get to ten below in the winters there. With the altitude, when the sun comes out, your face can be warm on the light side, but still feel frozen in the shadow.

Almost all Hulings paintings have human or animal figures, even the landscapes—even if it’s just a tiny random bird. Here? No. In Ten Below-Taos, New Mexico there’s no one. Not a living soul. It’s just too cold.

The only person out there was Clark himself, which makes us marvel at his dedication. At the first sign of snow in the forecast, he’d be excited to be out, gathering source material. Snow is a major technical challenge for a painter—variations between hard and soft edges, finesse with light and shadow…and that’s just the tip of the proverbial iceberg. Here, Hulings has created the most three-dimensional and intricate pattern of tire tracks, drifts, and snowbanks. If you’ve driven through major winter conditions, you’ll recognize the curved tracks on the left, where a driver has oversteered into the bank. The amber light of the second-floor apartment is another sign of human activity: it’s a small hint of the life that’s going on inside in the late afternoon of a cold day, and Hulings’ way of including life in the composition.

This painting is a beautiful example of how Hulings navigated a hugely successful career while staying true to his vision as an easel painter. By 1974, he had established a solid niche in Western Art and was commanding formidable prices for his work. Despite his respect for the Western community, he wasn’t actually a Western artist. He avoided majestic elk and horses in favor of the humble donkey. Cowboys don’t figure at all, and if Indigenous people are in a Hulings painting, they are usually farmers or craftspeople going about a hard day’s work. With the rugged Ten Below title and the Taos location, Hulings created something that would appeal to his core collectors, yet was his own mysterious and compelling study.

Taos Pueblo, which meets the town of Taos on the northern border, is one of the oldest continuously inhabited areas of the US: built between 1,000 and 1450 AD. A center for trade, commerce, and hospitality with a shifting mix of Pueblo Nations, Spanish, Comanche, Apache, Mexican, and American visitors, there’s a potent mix of people and traditions—which may be part of why Taos is still such a creative place.

Following in His Footsteps

The arts have flourished in Taos for years, well beyond the famous Taos Society of Artists from the early 20th Century. Native American artists from Northern New Mexico are a force to be reckoned with, in ceramics and beyond. Lynnette Haozous, Bobby Bales, and Dawning Pollen Shorty, are just a few examples of Taos Pueblo artists making important contemporary contributions, and the kinds of professionals we’re working with as The Clark Hulings Fund co-produces the Virtual Santa Fe Indian Market with SWAIA this year. It’s an honor for CHF to share Hulings’ legacy with this generation of Native American artists and help secure their livelihoods for this winter and beyond.