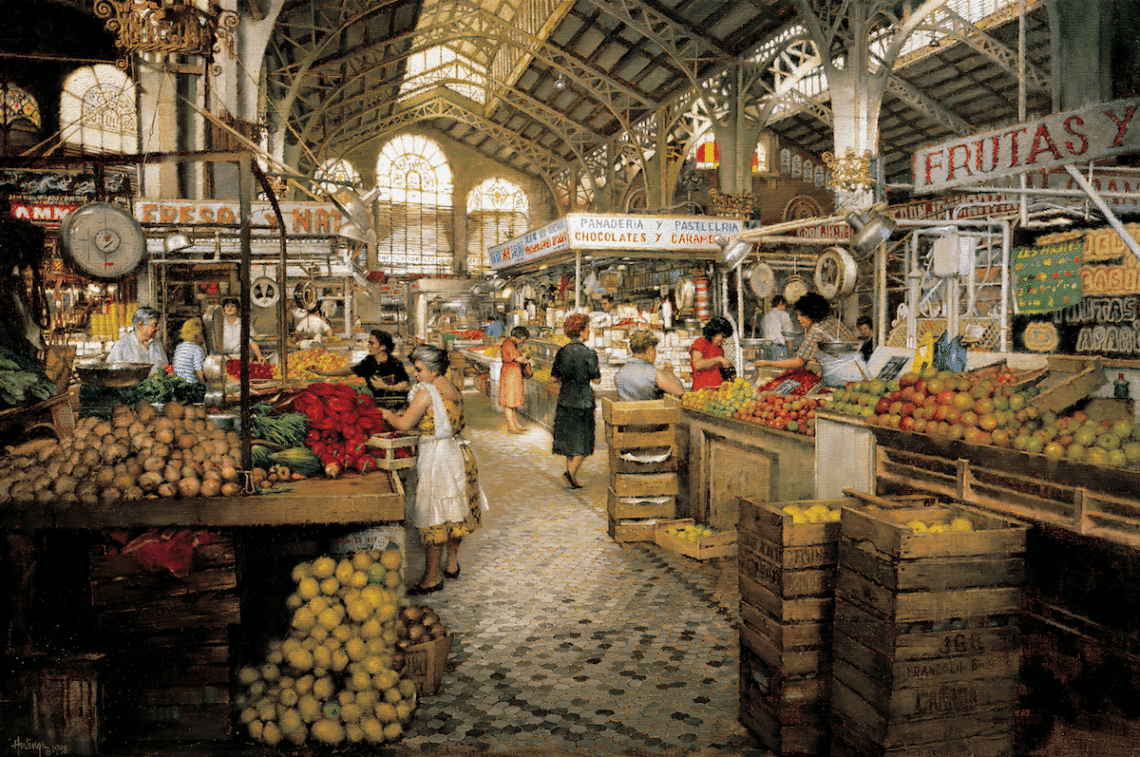 “I was particularly struck by the beauty of the special diffused light: it was almost churchlike.”

It seems about time for a European getaway! Today we’re in Valencia, Spain, in the middle of a bustling day in one of the largest markets in Europe. The Mercado Central started as an open-air market in 1839. The current Art Nouveau-style building was designed in 1910 by Alejandro Soler March and Francisco Guàrdia Vial, and was completed in 1928. Hulings was living in Spain as a child in 1928, and came back to paint this 70 years later, in 1998. The market is still running today. There’s probably someone unpacking a crate of peppers there as we speak—but now they may have a cell phone in their pocket and accept payment by debit card.

In Hulings own words: “This is the market where my sister and I were taken as small children. Years later, when I returned to Valencia, the market looked just as I remembered it. But viewed through adult eyes, it was even grander than the picture I had carried in my head. I was particularly struck by the beauty of the special diffused light: it was almost churchlike.”

Interior Market, Valencia manages to pack in even more detail than a typical Hulings market—the architecture itself, with its arched windows and ceiling struts, a hexagonal floor tile pattern showing the changing light, and the hand-lettered signs where Hulings has created custom fonts for each stand: chocolate and caramels, bread and pastries, strawberries and cream, and fruit and vegetables. The remarkable part about this work is that the viewer doesn’t get lost in the hundreds of small elements that went into it. The winding path through the stalls gives us the feeling of taking a leisurely stroll. The bright light filtering through the windows is grounded by the deep shadows all four corners. The red pepper accent is large and in charge and a major visual anchor. A Hulings market has a rhythm that is created by a series of masterful choices, and this is a spectacular example.

If you love a European market scene and don’t mind extending our imaginary getaway with a trip to Paris, we have a few Hulings-signed archival prints available of Île de La Cité Flower Market. It features a similar riot of color in a covered Art Nouveau market.