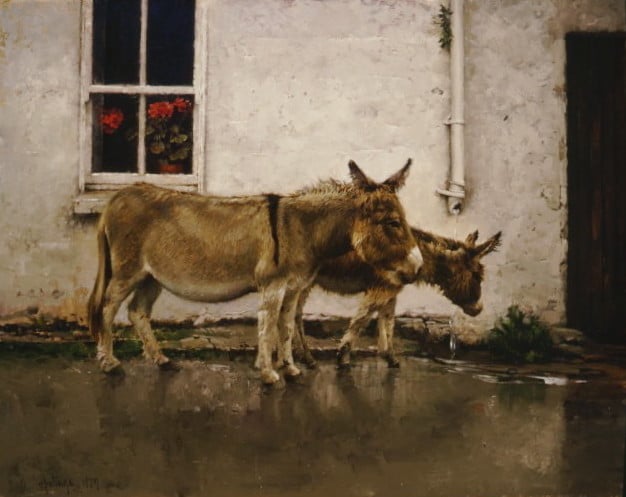 It’s been raining on and off all week in New York City, and at the end of the day, it gets a little tiring. There’s a whole part of daily life that just refuses to be glamorous—despite, or maybe even because of, the increasing pressure to present an artificially perfect, instagram-worthy image.

I Am What I Am

These two donkeys in West Ireland look like they’ve never heard of spin class or a low-carb diet. They are just who they are: short, round and shaggy. And their day was a little gray and misty. But heck, what are you going to do? Donkeys are pretty fearless when facing actual danger and they won’t stand for mistreatment, but other than that, they tend to be patient and enduring. The larger animal has a distinctly benign expression on his furry face: whatever’s happening, he could take it or leave it. He’s seen most of it before. Donkeys have been an important part of rural life in West Ireland: clearing rocks from fields, plowing, transporting turf from bogs, moving people and goods, grinding corn, and sometimes even as family pets.

One of Those Days

Hulings painted A Rainy Day in Galway in 1979, most likely from source material gathered in a trip to Ireland in the fall of 1978. While Hulings frequently took on the challenges of a spectacular scene, he continued to come back to the discipline and focus of simpler moments as well. This painting is interesting compositionally, because it’s engaging without being neatly wrapped up. The window is cropped before we can see the top of the frame. We only see a slice of the sunken door. Little touches of greenery pop out on the drainpipe and between the building and the pavement, and two pots of red geraniums in the window are a cheery accent in a painting full of neturals. The really mood-setting aspect of the work is the slick, wet pavement in the foreground.

If you’re not yet aware of Galway, or “Gaillimh” in Irish, it’s time to catch up, because it will be a European Capital of Culture in 2020. While it’s true that there’s a fair amount of rain, there’s also beautiful coastal scenery, some good craft breweries and oysters, and The Collegiate Church of St. Nicholas that dates back to 1320—which is rumored to have been a place of worship for Christopher Columbus.

If you, like Clark Hulings, are inspired by the patience of donkeys and burros, we have a beautiful giclée on canvas of Flower Burro in 12 x 12″ or 18 x 18″ sizes, or a signed paper print of Elizabeth’s Burro 16 x 19.5″.