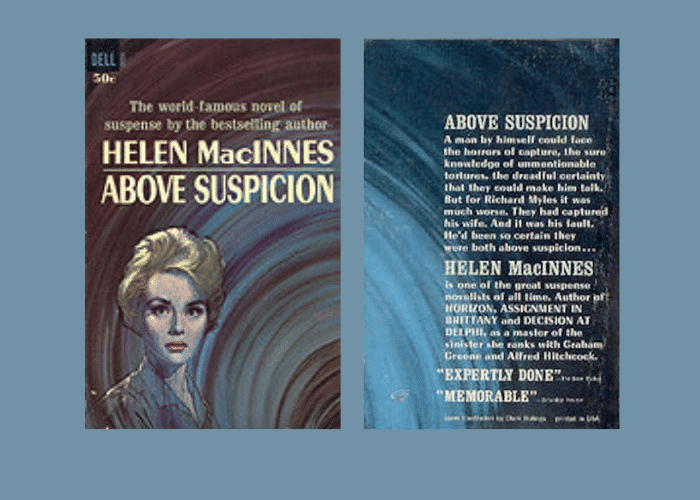 “A newly-married couple is drafted to help the British Secret Service foil a Nazi plot to develop a deadly sea-mine weapon.”

There’s so much to love about this Hulings cover from 1962. If you’re an Alfred Hitchcock fan, you’ll see a similarity in the swirling vortex to the spinning spiral that appears as the recurring motif in Vertigo. In fact, the cool blonde on this cover is not unlike the styling for Kim Novak in the movie, which co-starred Jimmy Stewart.

Author Helen McInnes was a Scot who immigrated to the US in 1937. Well-educated with degrees in French, German, and Library Sciences, her passion for writing was always about espionage: she had a live-in research source on this topic, as her husband Gilbert Highnet had been an MI6 officer in British Intelligence as well as a classical scholar. Their honeymoon travels in Europe, particularly Bavaria, developed MacInnes’ commitment to advocate against Nazi oppression, and many of her thrillers were set in the Second World War.

Above Suspicion was her first and most famous novel, written in 1941, and later made into a film of the same title starring Joan Crawford. The plot is loosely inspired by MacInnes’ own honeymoon: a newly-married couple is drafted to help the British Secret Service foil a Nazi plot to develop a deadly sea-mine weapon. MacInnes wrote until the mid-1980s, by which time her focus had switched to the cold war.

Hulings cover illustrations were often for the first printing, but in this case, the Dell edition was almost twenty years later, which attests to the ongoing popularity of the book. As we’ve touched on in recent weeks, Hulings was always aware of contemporary design styles, so he’s given this illustration a clean and hip early-60s update that expresses intrigue in a way appropriate to the time. As well as the Hitchcock reference, The Twilight Zone was still using the spinning spiral in its opening credits, and it was about to blow up again with the psychedelic imagery of the late 60s. Swirls come up in various places in art history, from very early prehistoric examples, to Van Gogh’s Starry Night. The Fibonacci Sequence, which is the mathematical term for the proportions of a perfect spiral, provides the basis of this shape in nature, such as seashells, and for the “Golden Mean” used in classical art composition.

Your Mission, Should You Chose to Accept It…

Now here’s an intriguing issue for our league of undercover art-spies: it’s easy to order an inexpensive copy of this novel online with the Hulings cover, but do you know where the original is? You can submit your report in triplicate or in-code to info@clarkhulings.com