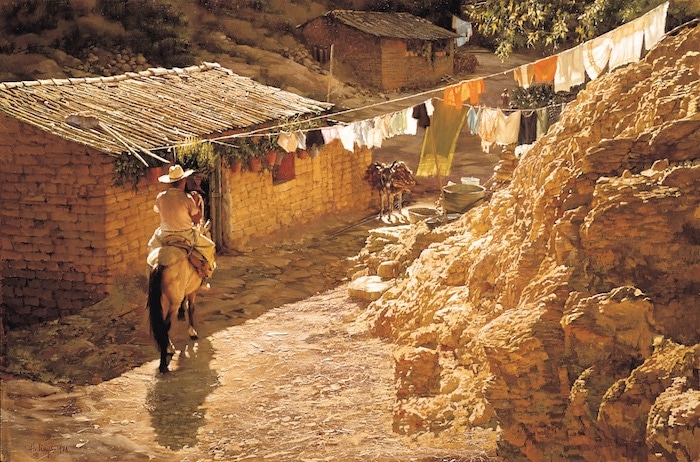 “Hulings loved to paint laundry in general, and Mexican laundry in particular, and this is a show-stopping example.”

Even with such a consistently strong body of work, Hulings has a few real standouts, where his classic subject matter is lifted to the next level. 1974’s Taxco Horseman is a case in point. The 24 x 36″ oil on canvas contains many signature Hulings elements, each of which alone would knock your socks off, but which together create a stunning painting. This is an important work for any serious collector to consider.

Taxco de Alarcón, in the southern Mexican state of Guerrero, was founded on silver. While gold is the precious metal most often associated with Mexico—Aztec gold was plundered by Spanish Conquistadors—the Spanish empire actually ran to a large extent on American silver mined in Mexico and Bolivia. Taxco was the center of the silver mining industry in Central America, and has a rich tradition of jewelers and craftspeople who work in silver. That tradition continues to this day, and it helped the region’s economy shift to tourism during the second half of the 20th Century. The name “Taxco” (pronounced “Tasco”) could either be derived from the Aztec word for “place of the ball-courts”—which refers to the very popular handball of the pre-Columbian era—or from the word meaning “the father of the water,” because of the high waterfalls nearby.

As is the case with most places with a deep history and a changing economy, daily life has its timeless and peaceful moments. This scene shows the return of a hardworking horseman in a hat—and clearly whoever was at home spent the day working as well. As the man approaches the door, he’s just about to leave the bright, hard-angled sunlight of the afternoon and enter the protective shadow of the building. The greenery in the hanging terra cotta pots is inviting and friendly, and shows that someone cares about the home. Hulings loved painting laundry in general, and Mexican laundry in particular, and this is a show-stopping example. The series of triangles accented by the clotheslines is what makes the scene look nestled into the rock. We don’t see a big vista or a big open sky here, rather we are offered domestic life brought down to scale. The amber-golden brushwork in the foreground plays expertly with color values and texture. And even though the horse is prominent (a rarity in Hulings’ work), he still gives us a burro, who is very little but very important because so many visual elements of the composition point back to her as she patiently waits for her workday to end with the unloading of her packs.

In A Gallery of Paintings, Hulings writes: “The lady of this Taxco house has washed those clothes in that tub and hung them up to catch the backlighting of the sun, adding some sparkle and brilliance to this otherwise drab scene. The clothesline keeps the horseman from dominating the picture and it frames the little burro.”

Home with the Horseman

Our colleagues at the Zaplin Lampert Gallery in Santa Fe are offering this standout painting for sale. We’ll be happy to make an introduction: just send us a note. If you’d like to take this scene home but the original painting is not in your budget, you can pick up A Gallery of Paintings at our store, turn to page 106, and enjoy it anytime.