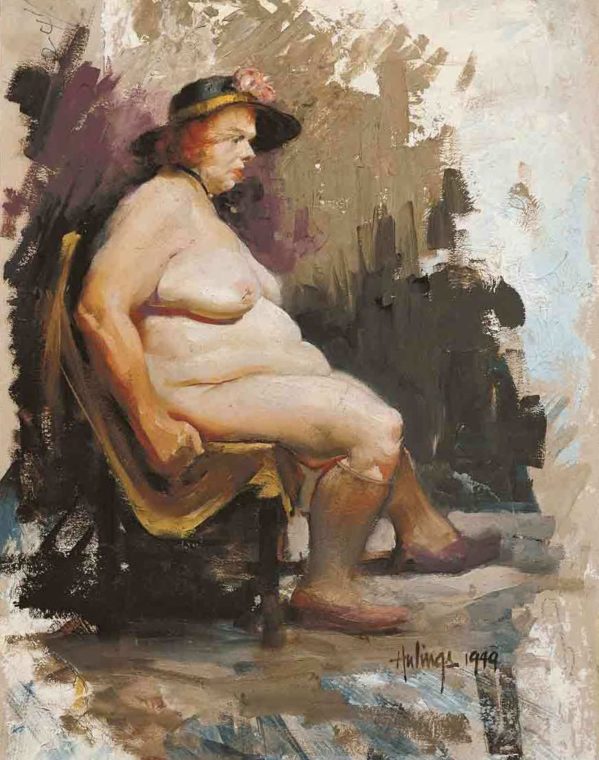 “What spirit is so empty and blind, that it cannot recognize the fact that the foot is more noble than the shoe, and skin more beautiful than the garment with which it is clothed?”— Michelangelo

Picture it: 1949. The Art Student’s League. Clark Hulings was 27 years old and pursuing the dream, studying with the legend Frank Reilly at the Art Student’s League in New York City. Clark had arranged to meet two of his parents’ friends at The League, and while they waited for him in the hall, a life-drawing model swanned out of the class, robe flying, and leaving nothing to the imagination. The friends were scandalized, and Clark’s father wryly suggested later that they all could have met somewhere else. The model was Suzy: a woman of certain years and of independent means, looking for new adventures in the city that allowed her to do one of her favorite things: not wear clothes. As one of “The Three Graces” in the Ziegfeld Follies of 1919, she was used to the spotlight.

Life drawing is a cornerstone of an atelier art education. Hulings wrote: “When we artists go out into the world after art school we rarely continue painting what we are best trained to paint—the nude.” Hulings returned to the discipline of drawing and painting from life three or four weeks a year. His study of Butch from 2005, fifty-five years later, shows that Suzy is not alone: even a retired NYPD officer might be in search of new and liberating experiences in the art world.

The nude is a fundamental subject: it appears first in figurines in the Paleolithic, through Egyptian and Greek art, and in the art of India and Japan. In Western Art we see famous nudes reappear in the Renaissance, such as the many versions of “David,” first by Donatello and then later the iconic statue by Michelangelo. Heroic figures with a classical or biblical inspiration are often unclothed, in part so that we can see their magnificence fully revealed.

Our model, Suzy, has a magnificence of her very own. Her wild spirit is very much in evidence here with her bright red hair, flowered hat, necklace, her knee-high nylons, and slip-on shoes. Her face is concentrated and no-nonsense: she’s not posing; she’s thinking. Hulings is unfettered in his background brushwork, showing a bold, paint-heavy rhythm that might mirror the confidence of a strong woman.

Suzy’s moment in the spotlight lives on. Other students from that era at The League, of course, have their renderings of Suzy, and she and Butch are both featured as part of a series of life-drawing studies in A Gallery of Paintings by Clark Hulings.