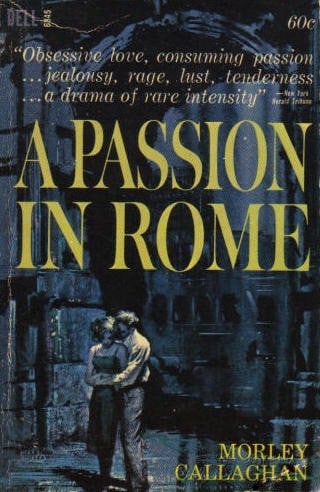 The Ides of March

“Morely Callaghan’s main character in this book is a failed painter who falls in love with a failed American singer—who is pretending to be Italian.”

The Ides of March marked a lunar cycle in the Roman calendar that was equivalent to our March 15th; it was a day dedicated to Jupiter and settling debts. It changed its meaning forever on March 15th, 44 BC, when Julius Caesar was famously assassinated at a meeting of the Roman Senate. If you’re a fan of classic comedy, you might remember Wayne & Shuster’s sketch about this pivotal moment in history on the Ed Sullivan show in 1958—the satire of Shakespeare’s Julius Caesar was so popular that New York bars started using one of the sketch’s pseudo-latin jokes and began calling more than one martini, “martinus.”

End of an Era

Clark Hulings painted all over Italy: Sicily, Tuscany, Liguria…but we don’t have much of his fine art from Rome. Hulings’ illustration for the cover of A Passion in Rome was published in 1962, at the tail end of his commercial illustration era—the year he joined Grand Central Galleries and re-dedicated himself to easel painting.

Interestingly, Morely Callaghan’s main character in this book is a failed painter who falls in love with a failed American singer—who is pretending to be Italian. In the midst of all the artistic struggles and identity crises, there’s a film-noir tone and a transition between Pope Pius XII and John XXIII. A friend of Ernest Hemingway’s from their days working together at the Toronto Star, Callaghan is most respected for his short stories.

Date Night at the Colosseum

Hulings’ cover illustration picks up on the noir-genre theme and is all deep blues and rich blacks. The couple is glamorous and yet sad, protected by the curve of the arch in the architecture with moonlight falling down on their shoulders. If you look closely behind the yellow title lettering, you will see something that looks like it could be one of the broken walls of the Colosseum.

We are always on the lookout for the originals of these illustrations. Dell Publishing was bought out and is now part of Bantam Dell Publishing of Random House—so if you have connections in the art department there, or happen to know where this illustration is, drop us a line.