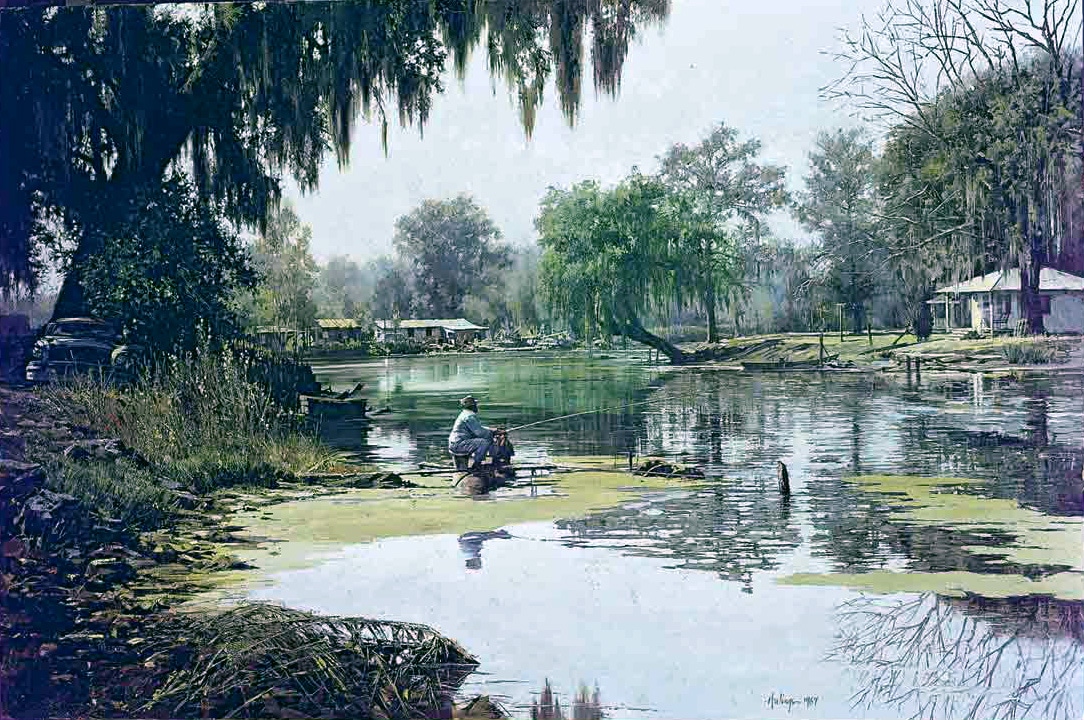 “A strong tree trunk softened by Spanish Moss frames the fisherwoman—almost as if the environment itself ‘has her back.’ “

Clark Hulings had many ties to Louisiana: his parents moved there during WWII, when his father headed up the effort to create synthetic rubber to replace the rubber tree supply that had fallen under Japanese control. They stayed there for the tensioning decades of their lives. He moved down to be with them after the war and built a successful career as a portraitist in Baton Rouge, and his sister Susan Ottinger (Hulings) lived there until this week, when she passed at the age of 98. It’s never easy to say goodbye, but what a long life to celebrate!

This is an incredibly contemplative Bayou scene. The silver-gray light in Louisiana appealed to Hulings—the other places he found it in the world were certain parts of France and the U.K. This painting is full of reflections, and features variations on the silver-gray with blue, violet, and green. The composition is classic and flowing. The darkest values frame the left side, with a strong tree trunk softened by Spanish Moss that frames the fisherwoman—almost as if the environment itself “has her back.” Bass, white perch, crawfish, and catfish might be found in the water, and trees in the area include tupelo and cypress, which live to be hundreds of years old.

The Times They Are A Changin’

Hulings painted this in 1967, which was relatively early in his easel-painting career. Although this work has a timeless and tranquil feeling, in the wider world, US troops were in Vietnam, pop culture was going mad over the release of The Beatles Sgt. Pepper album, and Thurgood Marshall was confirmed as the first African American justice on the Supreme Court.

Mardi Gras is coming up next week on March 5th. Proving that some things never change, Louisiana will be one big celebration, whooping it up for a last chance to party before Ash Wednesday, when the sobering influence of Lent begins. New Orleans may be the loudest and most famous of Louisiana’s Carnival celebrations, but don’t think for a minute that the rest of the state doesn’t make sure to honor Fat Tuesday properly.

You can see a similar silvery light in the water in Breton Reflections, which is available as a giclée from our reproductions store.