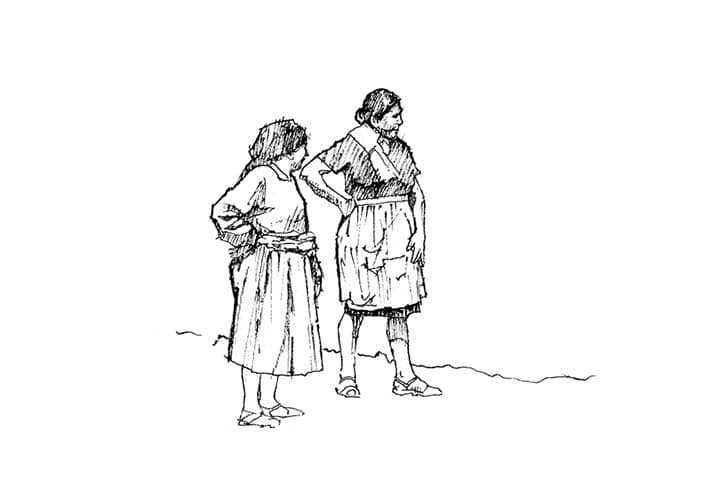 “They do not agree, they did not expect it, and they have something to say about it…”

When he drew this in 1999, Clark Hulings was certainly already a master painter. It was the year of his one-man show at the Nedra Matteucci Galleries in Santa Fe—with its beautiful accompanying catalogue and an introductory essay by Marsha McEuen. That same year there were featured articles about Hulings and his work in Southwest Art, Art of the West, Art & Antiques, and The Santa Fean, not to mention weeks of European travel.

The catalog features some impressive, larger work, but this little gem takes us back to Hulings’ foundations. He had several formative teachers, starting early with Russian portraitist Sigismund Ivanowski, and moving on to George Bridgeman’s anatomy and figure drawing classes. Bridgeman remains an absolute icon even today. He taught generations of artists at The Art Student’s League, including the likes of Norman Rockwell and classic cartoonist Will Eisner. Hulings’ own years as a commercial illustrator involved hundreds of drawings of the figure that either ended up as paperback or album covers or stayed in notebooks, and they undoubtedly also influenced his approach in his later career as well.

These two Italian ladies are quite the characters. What are they looking at? They’re probably midway through their day’s work, still wearing their aprons. With right hands placed on right hips, heads inclined, mouths open about to speak…whatever it is they are witnessing, they do not agree, they did not expect it, and they have something to say about it. The simple line suggests a curb or the edge of a house, and it extends in the same direction as their gazes. It’s what’s NOT in this scene that is the most compelling part, and this gives us a small window into the wider playing field of the fine artist. An illustrator must usually show the story. A fine artist can have some finesse with the facts and create a mystery that activates the viewer’s own imagination. What do you think they’re looking at? Who’s going to get in trouble?

We carry the 1999 Catalogue in the Hulings store. It includes 35 full-color reproductions and 20 drawings, including these two ladies, keeping everyone in line.