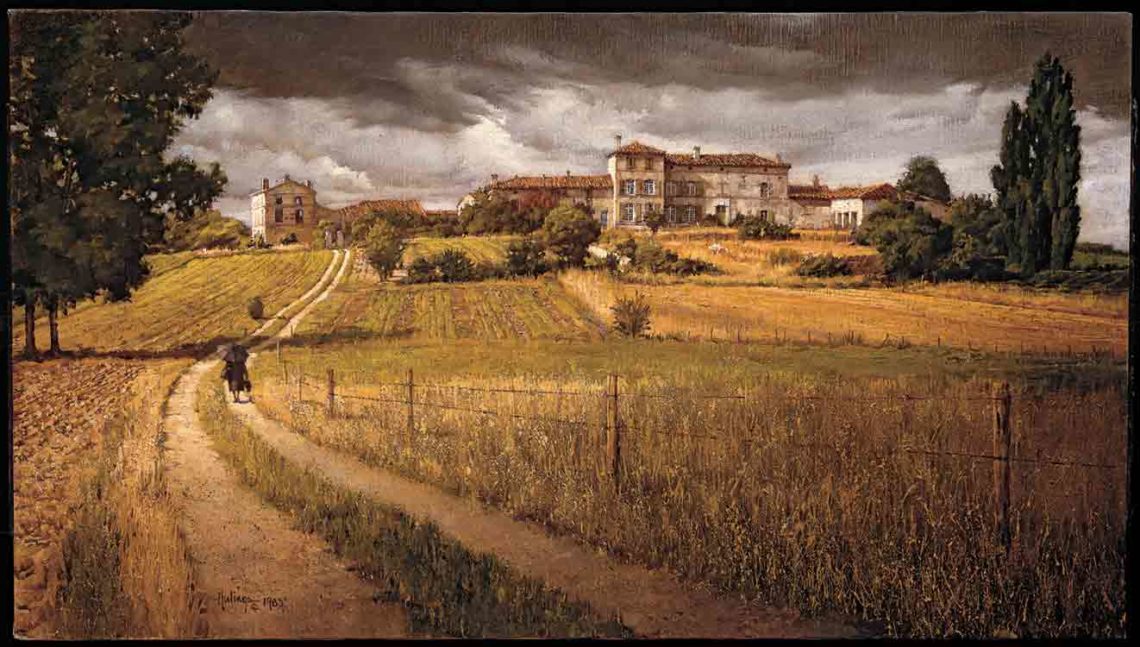 “When she arrived, she stopped to look at my work. She had hobbled half a mile just to see the painting.”

With Valentine’s Day approaching, what could be more romantic than a drive through the French countryside? In Clark’s own words from A Gallery of Paintings, here’s the story of his 1983 work, Hiersac Château.

Cognac in the Car

“One summer we were driving through the Cognac country of France and stopped for our midday meal in the village of Hiersac. The town itself had little to offer in the way of either food or scenery and we were just about to push on when my eye was struck by a château in the distance. Out came the paints. Food was forgotten, and I painted this backlit noontime sketch.

“Although pleased with my effort, I wondered what the château would look like with side lighting at sunrise. I was to find out two years later on another trip to France when we sought out the Hiersac château and I painted a second sketch.

“We were staying in a nearby city and I was at my scene by dawn. I found the period when the sunlight was skimming delicately across the façade of the building to be very short, so the painting required sessions on four successive days. On the final day, I was sitting working when a tiny black speck appeared in the distance form around the back of the château. As it came toward me, I saw that it was an old lady carrying a black umbrella. Always on the look out for a figure to put in a painting, I photographed her as she approached. When she arrived, she stopped to look at my work. She had hobbled half a mile just to see the painting. Having watched me for four mornings from the window of the château, her curiosity to see what I was doing had finally overcome her.

“Then she began to talk. ‘The château is just a shell,’ she said. ‘Only four rooms are used. It was once very prosperous being the center of vast Cognac vineyards, but many years ago there was a prolonged drought and the land was poisoned. The vines withered and the château was abandoned. Fifteen years ago the present owner bought the place, gambled on the soil and planted new vines, which are now flourishing. Perhaps someday the lovely old building will be restored to its former glory. Not likely! Not with today’s wicked taxes!’ ”

This story is one of many that shows us the extent of Hulings’ commitment to his work. Over a two-year period, he returned to the scene multiple times —often at the break of dawn — to do plein air sketches and take a series of photographs, and then later created the final product in the focused environment of his studio. A body of work of his calibre is the result of a lifetime of daily choices to return over and over again to the discipline of creative work. We see that process mirrored in the lady’s traverse up the hill, which she must have done every day of her life.