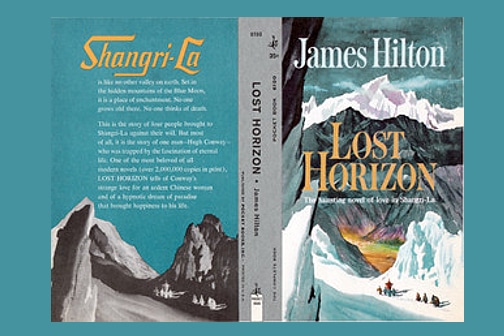 “If you’re a fan of classic films, you may have seen Frank Capra’s 1937 movie, but regardless of whether the book or film has crossed your path, most of us know
what ‘Shangri-La’ means.”

Lost Horizon is one of the most iconic stories of the twentieth century. James Hilton’s book was originally released in 1933; later that decade, Simon & Schuster’s new Pocket Books revolutionized the way Americans read by making Lost Horizon the first mass-market paperback. Imagine a book you could easily carry with you, affordably-priced at 25 cents!

If you’re a fan of classic films, you may have seen Frank Capra’s 1937 movie, but regardless of whether the book or film has crossed your path, most of us know what “Shangri-La” means. Western culture has dabbled in utopias and dystopias from Thoreau’s Walden to Margaret Atwood’s The Handmaid’s Tale — we’ve long used stories of the way things could be to think about where we are. Lost Horizon‘s Tibetan paradise, Shangri-La, is hidden away in the Kunlun mountain range; it boasts inhabitants who are happy, secluded from the cares of the world, and able to look fantastic at 250 years old without Botox, as long as they never leave. Shangri-La is now firmly entrenched as a paradise in our cultural imaginations: Roosevelt used it as the name of his presidential retreat —and a comment he made caused an aircraft carrier to bear the name as well, it’s referenced in pop and rock from Stevie Nicks to Led Zepplin to Elton John, and the dark side of Saturn’s moon, Titan, was named Shangri-La by the International Astronomical Union.

Clark Hulings is part of this incredible story with these beautiful front-and-back cover illustrations for the 1964 edition. He’s working with bands of bold color: the bright blue sky, snow-covered mountains, and under that, the black mountain face fading to gray. Then there’s the otherworldly surprise of a rainbow glow in the valley with orange, yellow, green and pink. The up-close rock that frames the left side of the illustration would be in line with the spine of the book. Hulings fans will be happy to see the signature small red accent in what looks like a litter or palanquin in the explorer’s party — a reminder that this is, in many ways, a very colonial story. The figures are on the brink of discovery of the magic below and the viewer can see just ahead to what they are about to find. The back cover is a black-and-white “negative” version of the lower third of the front image, showing a more brooding, mysterious quality.

Our mystery, when it comes to Clark Hulings’ commissioned illustrations, is finding the originals. Let us know if you know the whereabouts of this one!

For anyone who’d like to indulge in some classic winter escape reading, there are a few copies of Lost Horizon with the ’64 Hulings cover out there on the internet. You won’t get them for 25 cents, of course.