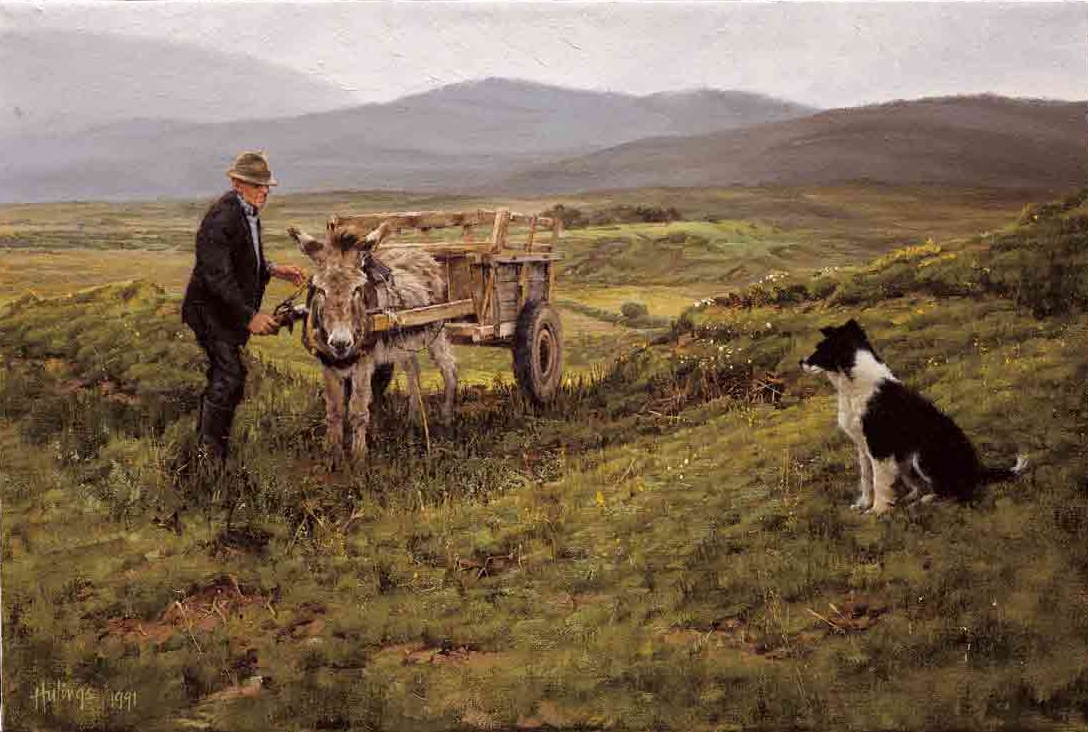 Year of the Dog

“I was impressed with the resignation of this dog, who patiently waited while his master loaded the cart with peat. He only stirred when he knew it was time to head home.”

With the lunar New Year landing on Friday February 16th, we are about to enter the Year of the Dog. What’s better than the loyalty and unconditional love of our dogs, even when they’ve ripped up the garbage before a dinner party?

Of all of our beloved canine friends and coworkers, the Border Collie may be the most intelligent. Bred as herding dogs, the breed as we know it was formalized at the end of the 19th century in the British Isles. All Border Collies can be traced back to a turn-of-the-century sheepherder named “Old Hemp”— his great-great-great grandchildren are still winning championship trials today.

A Peat Farmer for the Ages

Clark Hulings’ Irish paintings date from the 1970s through the late 1990s; Irish Peat Man is from 1991, set in Bal Coneeley. This peninsula in West Ireland is ringed by beaches overlooking the Atlantic ocean. It’s known for its beautiful scenery, being a pioneering community for salmon farming, and is also very close to the landing site for the first transatlantic flight in 1919. As the world develops around him, this man is living an age-old existence. Val Coneeley is a potato farmer living in a thatched-roofed home, whose source of fuel is the local peat he gathers and brings home with his donkey and cart. Peat is still used as fuel in smaller Irish and Scottish communities, even though whiskey aficionados would probably like to save it for a smokey single-malt.

The black-and-white dog is a strong accent in the painting, contrasting the range of greens, browns, blues and greys of the moor, and he is positioned up a small rolling hill. Our eyes go very quickly to him because of this, but he, devotedly, is paying close attention to the man, and our gaze goes there as well. Hulings said in A Gallery of Paintings:  “I was impressed with the resignation of this dog, who patiently waited while his master loaded the cart with peat. He only stirred when he knew it was time to head home.”

The textures in this painting are very compelling, and if you look closely, you’ll see that Hulings has made fascinating choices about what to render in full detail and what to smooth over. The hills in the background are covered in mist and are almost impressionist. He’s deliberately muted the green of the grass, because to show it in all its glory would distract the viewer from the bigger picture. Some of the grass is blade-by-blade and some is blended, and the carefully-placed specks of yellow and white wildflowers create a series of tiny highlights. The windswept look of the grass really shows off the wild and woolly fur of both animals, with the signature Hulings shaggy donkey being slightly upstaged by the on-duty Border Collie.

Through a series of technical and inspired choices about what to show and how, Hulings does the artist’s job of providing us with perspective. Dogs do the same. Through being spontaneous and genuine, and always offering their unconditional love, they remind us of what is really important in life.

Clark Hulings loved dogs and had them in his life for many years. Here he is with Nellie and Pixie in a photo from the back of his 1999 Solo Show Catalogue.