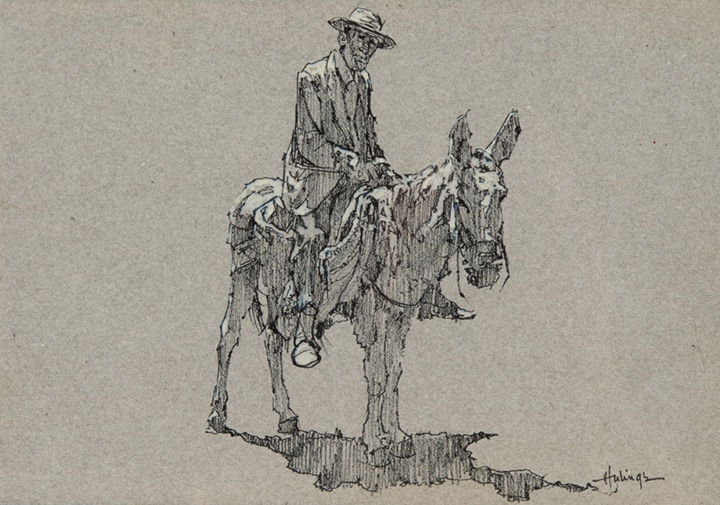 “The man and the burro are characters we often see in Hulings work, but these two really have personality.”

We’re wrapping up our five-week series on Hulings at the Scottsdale Art Auction on a lighter note with this whimsical Man and Burro. Drawings are almost a backstage pass to an artist’s process; a chance to see some of the ideas that may later recur in a painting. Let’s pull back the curtain with this one.

This simple study draws you right in. The man and the burro are characters we often see in Hulings work, but these two really have personality. Everything is elongated, from the rectangular shape of the man’s face with its strong jaw to the long oval of the donkey’s, from the draped folds of the coat and saddle blanket to all six lanky legs. The shadow underneath them is also extended, suggesting the lengths may be in part an effect of the angle of the sun. Unusually for Hulings, this felt-tip pen drawing also includes opaque watercolor, which gives us some extra-bright highlights falling on the man’s hat and shoulders, and the donkey’s forehead and back —intriguingly the turned-up sole of the man’s shoe is a bright accent, which makes us wonder if he may getting ready to dismount—perhaps to engage the artist portraying him.

Trouble with a Capital ‘T’

Both man and burro are wearing big expressions on their faces, with their heads slightly inclined toward each other, each seemingly asking something mysterious that could be as simple as “did I leave the oven on?” or as confrontational as “what are YOU looking at?” With Hulings’ personality as a bit of a troublemaker, you may even suspect he’s suggesting these two are up to something. If you like a little trouble and have your eye on this drawing, send us an email and we’ll introduce you to our colleagues at the auction.

If the original isn’t in your budget, A Gallery of Paintings includes several beautiful burro drawings and is a great addition to your coffee table collection.

In Hulings’ words from the book:
“I would like to finish my gallery of paintings with a small group of some of my burro friends […] As I have mentioned already, I believe a lifelong choice of subject matter for an artist somehow traces back to childhood influences. My love affair with the burro probably began when, as a child in Spain, I was taken often to visit the home of our maid Maria. Her family owned a small burro which was used occasionally as a beast of light burden but was primarily a pet — a gentle, nuzzling pet that followed us around and gave us rides.” 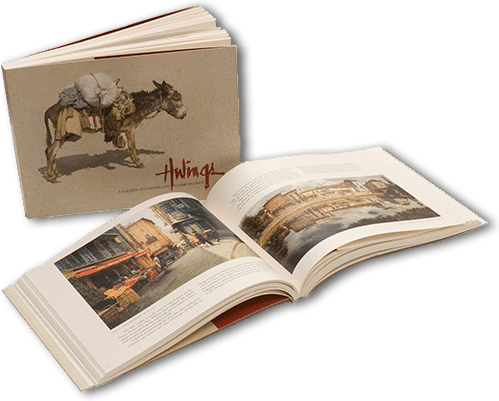 Happy Easter and Passover to those celebrating!