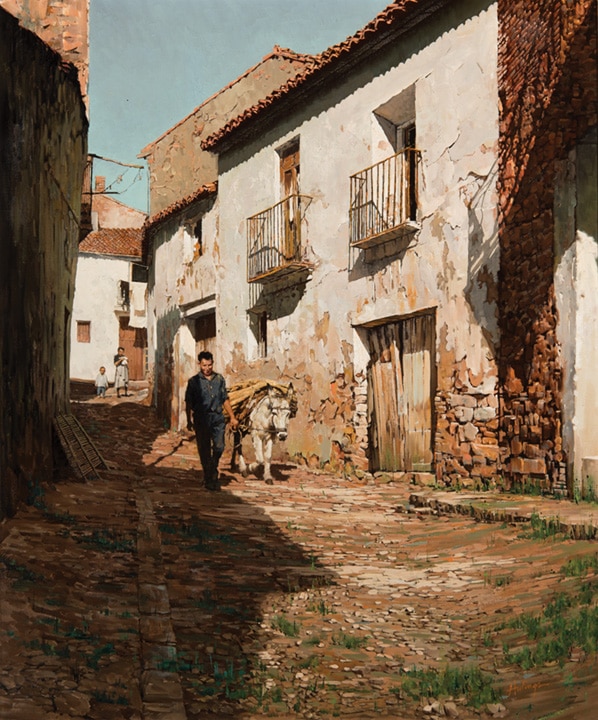 “What relief there is comes from the bright green grass growing determinedly through the cobblestone street in the foreground, and the triangular patch of blue sky.”

This man and his white burro are classic Hulings figures, moving toward us along the strong diagonal line that runs from top left to bottom right. In the background in their own patch of sunlight, a woman stands watching them leave with a child at her side, and possibly a second child in the fabric in her arms. In his classic style, we’re seeing a slice from the middle of a longer story—the moment of goodbye between family members before putting their noses back to the grindstone and getting their work done. What are the costs of work and survival in this family? Are they as unrelenting as they appear to be in this piece?

Serra #2 – Man Leading Donkey is the only vertical, or portrait-orientation work in the group of Hulings paintings at the Scottsdale Art Auction on April 7, 2018. Unusually for Hulings, this hot, dry scene with stark sunlight and a simple color palette is not relieved by the presence of flowers in pots or on the balconies—in a Hulings Spanish composition we’d typically expect to see accents from a few red geraniums. There is detailed patina on the white wall, and yet more texture in the stones on the road and in the donkey’s burlap pack. Beyond texture, what relief there is comes from the bright green grass growing determinedly through the cobblestone street in the foreground, and from the triangular patch of blue sky.

A Steep Climb Balanced by History and Celebrations

This painting is set on a rustic street in Valencia, Spain. Clark Hulings called Spain home as a child and he returned there many times throughout his career. Serra is a pass in the mountain valley of the Calderona range, hence the steeply inclined streets. The foundations of several 14th century Medieval fortifications remain; there’s also a monastery dating back to 1271, an 11-arch Gothic aqueduct, and two towers. Serra is also close to several natural springs. A cherry festival in mid-June kicks off a season of celebrations throughout the summer, which includes St. Joseph and Our Lady of the Angels commemorations, re-enactments of 13th century “Moors and Christians” conflicts, and which culminates with the running of the bulls at the end of August.

If you’re in the market for a Hulings painting, you can’t go wrong with this one with its Spanish setting, masterful chiaroscuro, striking composition, and witness to a daily event in the life of a hardworking family. Throughout the span of Hulings’ long career, we see a repetition of the motifs developed in this earlier easel work from the 1960s, like this one. If you were struck by it, send us a note and we’ll put you in touch with the team at the Scottsdale Art Auction.

If you like this piece, but the climb to its asking price is too steep, then take a look at the very affordable archival print of Noonday Sun that shares the hot Spanish setting, the corridor between buildings and the small family moment. It’s available here.