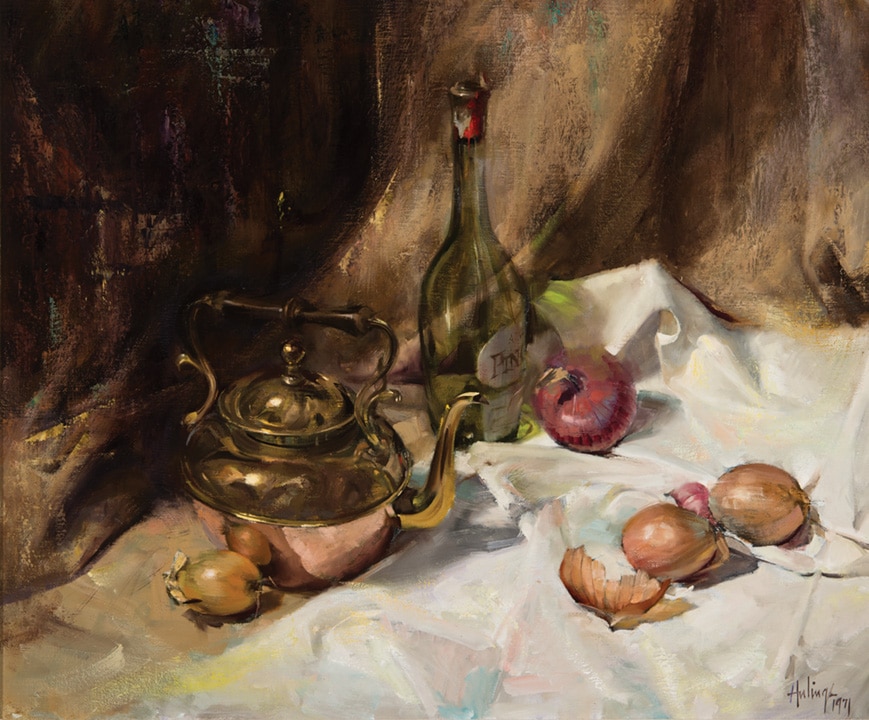 Not Your Typical Still Life

“Full of circles and swirls, reflections and transparencies, this still life isn’t as still as it looks at first glance.”

Layer after transparent layer, each thinner than paper: the onion is a humble ingredient but an essential one. Never one to shy away from a hardworking underdog, Clark Hulings features onions in several of his still life works, embracing the technical challenge of their almost-ephemeral papery skins and the everydayness of their presence in the home.

Still Life with Onions is our third painting in a series about the five Hulings works to be featured at The Scottsdale Art Auction on April 7th.

This 1971 still life is typical for Hulings, in that it’s not really typical! It isn’t square, but nor is it a classic elongated rectangle. With an array of shining and translucent elements contrasted with earthy colors, this piece has some surprises. Hulings placed disparate objects together: they connect by being near one another, and not necessarily because they have an obvious, literal relationship. He wasn’t a “storyteller” per se, but he did frequently offer elements of a do-it-yourself narrative, where the viewer can assemble the story themselves. The wine bottle is empty, which makes us wonder: what happened there? Was there a party the night before? On a visual level, the clear green glass reveals the fold in the backdrop and is another transparent and light-reflecting layer in the painting — not to mention a showcase of technical skill.

Put the Kettle On

The Hulings family still owns the tea kettle, which Clark had collected in his travels and brought home, anticipating it might be used in his work. Its shine shows a mirror image of one of the four onions, with nuanced gold, copper, brown and yellow variations. The kettle creates a series of visual relationships in that it reflects all of the items around it. The onions have a fun range of colors, and he shows subtle skill in the way he renders their delicate skins; you’ll see that he has featured the skins both on and off, and in varied relationships to the light source.

Perhaps the most unexpected aspects of the painting are the backdrop and tablecloth. Within a figurative work, we have an almost abstract-expressionist sensibility: why are there visible teal and magenta brushstrokes livening-up the shadowed parts of the brown backdrop? Why does the white tablecloth show its highs in yellow and lows in turquoise? Hulings shows a range of styles and sensibilities that is unique among realist painters.

Last week’s painting, Ladies First, was a return to the building blocks of composition, and Still Life with Onions is an interesting comparison. There’s nothing fancy here with the choice of what may be burlap in the background and the collection of practical objects, so in that sense it’s also a “back to basics” composition, but it’s anything but geometric. Full of circles and swirls, reflections and transparencies, this still life isn’t as still as it looks at first glance. If you reflect on it and you decide you’re interested in the painting, just send us an email and we’ll make the connection to our colleagues in Scottsdale.

Giclée of the Day

If you love a Hulings still life (complete with an onion) but are looking for a giclée, we have a beauty available: White Roses with Onion is a different mood with its light palette, but you’ll see a family resemblance with the focused range of color values, and the brushstrokes and unexpected colors in the backdrop.