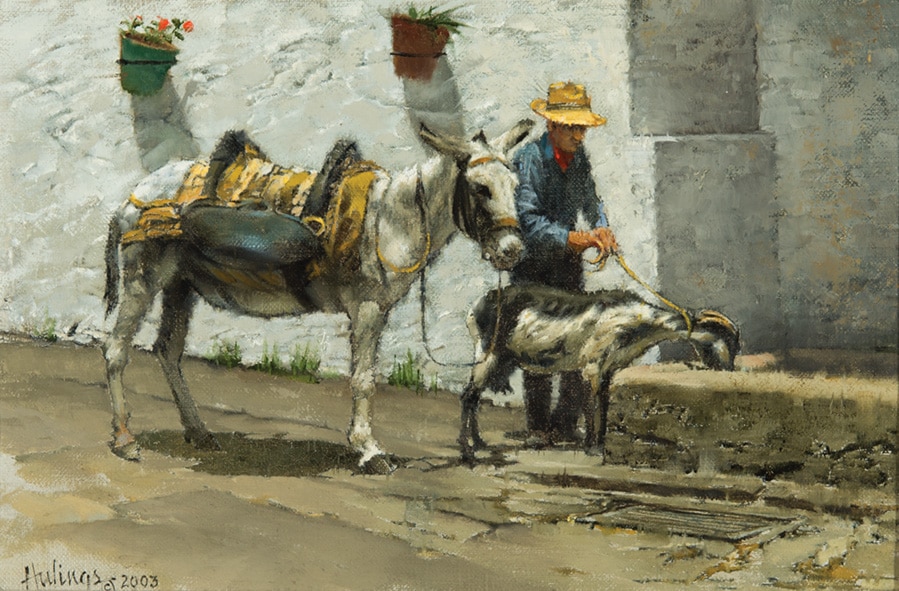 The Building Blocks of Composition

“Who but Clark Hulings would title a painting Ladies First and then reveal the ‘lady’ in question to be a goat?”

In distinct contrast to the circular motion, complexity and scope of last week’s featured painting, Kaleidoscope, Ladies First is a study in the building blocks of composition. This little gem from 2003 set in Northern Spain is the second in our series of Freshly Revealed stories about Hulings work at the Scottsdale Art Auction.

Who but Clark Hulings would title a painting Ladies First and then reveal the ‘lady’ in question to be a goat? This speaks to his sense of mischief, yet Hulings also demonstrates his respect for this man who recognizes that he and his animals are a team. The composition itself is anything but mischievous: it is, in fact, carefully calculated.

Hulings shows us a deliberately simple, geometric composition here. The centerpiece is the triangle formed from the top point of the man’s yellow hat that then extends down to the two points formed by the animals. Multiple squares stack up in the background of the white wall, and the water trough is a rectangle — shown without the distraction of the more ornate spout that would be further to our right. The pots of geraniums are both leaning to the right, creating two more triangles, and there’s yet another strong triangle in the donkey’s back hoof. Not surprisingly, there are classic Hulings red accents that in the flowers and in the man’s collar. The red accents remind us that it’s Spain, and they’re essential as the only pops of color in the painting.

There is some interesting detail in front of the goat: the road with its metal drain plate and the cracks in the stonework all have a visual interest to direct our attention to her, and also invite a comparison to the texture of her coat. The animal herself has beautiful black and white markings and clearly knows what she’s about.

Hulings studied with many of the greats, and you can see the George Bridgman influence here with his use of shapes in the composition, and the Frank Reilly influence in his use of color values. Not merely an academic study, it’s a rare glimpse inside Hulings’ technique while simultaneously showing a sense of humor. If it’s catching your eye, just send us an email and we’ll help you get your goat.

If you’d like a hard copy of the Scottsdale Art Auction calendar, our friends at the auction are still able to send them out this week: click here.

If you like a geometric composition and Spanish setting and are in the market for a reproduction, we need only travel a little southeast, to Valencia. Onteniente is a brilliant architectural painting — we have just one signed archival print on paper left , as well as three sizes of giclée on canvas, all at the Hulings store on Etsy.  And if endearing domestic creatures are more your bent, you can take a look at Flower Burro.