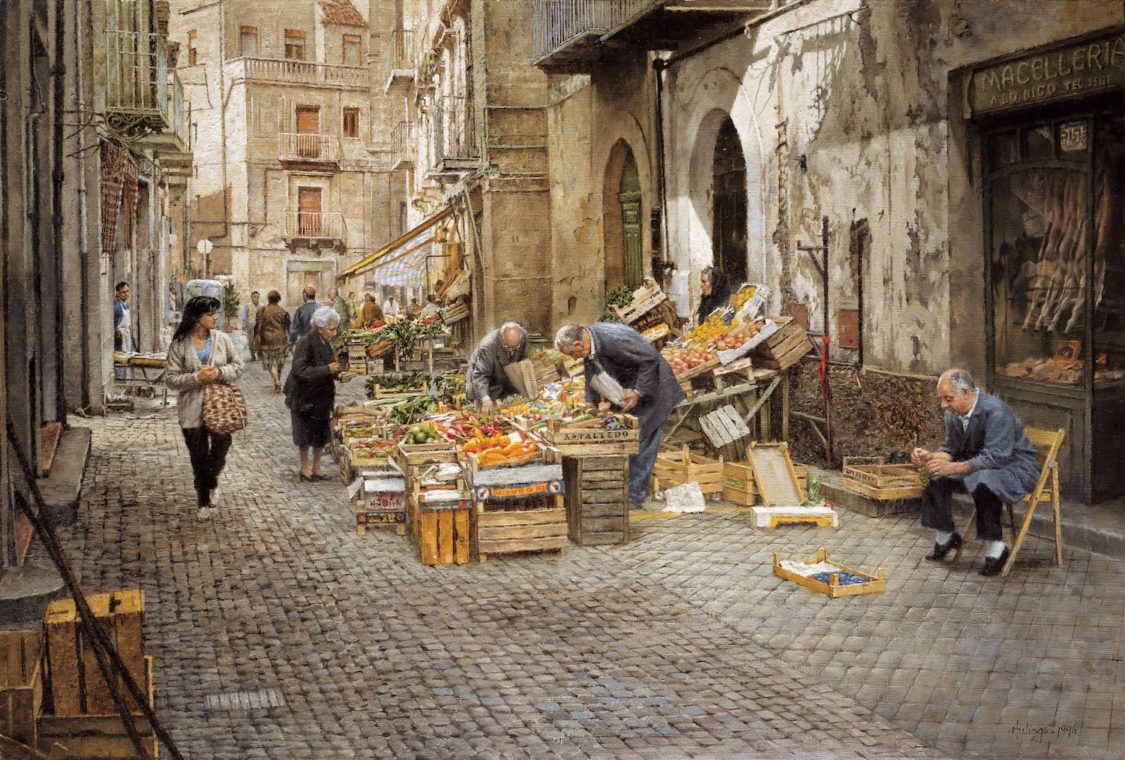 “It was to Enna that our Sicilian friends encouraged us to ‘rush’ should we encounter ‘bandits’ while scouring the countryside for painting material.”

In the days of Passover and between Catholic and Orthodox Easters, we’re thinking of Spring, and the holidays that commemorate liberation and renewal of life. Feasting is often a big part of these celebrations, and lamb is a favorite at tables across many countries and traditions.

From Slow Food to Fast Cars

The Island of Sicily has been invaded 32 times, and it’s culture and cuisines reflect a mix of influences, with Greek, North African, Middle Eastern and especially Spanish playing starring roles along with Southern Italian. The town of Enna, Enna, where this painting is set, sits dead-center in the middle of the island, earning the nickname “ombelico” or navel. With a neolithic settlement dating back to 14th century BC, Enna was later a site of worship for Demeter, goddess of the harvest, and its fertile ground was fought over many times during Greek and then Roman rule. It is also Sicily’s highest town of significance, and it was to Enna that our Sicilian friends encouraged us to “rush” should we encounter “bandits” while scouring the countryside for painting material during trips there when I was a child. These days it’s close to a world-class Formula One race track, and home to the Università Kore di Enna. Even so, it still hosts a daily outdoor market. Even while watching fast cars, Italians remain dedicated to slow food!

The Old and the New: A Perennial Balance

Clark Hulings painted San Antonio Market — Enna in 1996, and you’ll see that it has both timeless and contemporary elements. In the foreground, two older women are wearing the traditional widow’s black dresses and the men wear open-collared suits. The young woman with sneakers and a blue shirt is our “here and now” reference, and her turned head as she passes by suggests that we follow her gaze to the crates of produce. Hulings’ main accent color in the work is an orange-yellow, and he’s given us plenty of lemons and peppers, as well as highlights on some of the wooden crates, which encourage our eyes to bounce between the saffron accents. That red pops up in a few places as well, most notably the small piece of fabric tied to the railing on the right, which draws our attention to what’s happening in that part of the composition.

The glass window of the butcher shop shows four lamb carcasses that will probably be on their way home with someone for a special dinner. This was not routine subject matter for Hulings, but butchers are an important part of market culture, and Hulings himself notes “Carcasses do have their place in the history of art, from the bloody compositions of the Italian Renaissance to the dead rabbits and ducks that hang by their heels in Victorian still lifes. Even Rembrandt painted a hanging carcass, The Slaughtered Ox.” — Clark Hulings A Gallery of Paintings

If you want to look at Enna every day and don’t plan to move there, you can see its image in A Gallery of Paintings on page 33. If the cobblestones and produce are appealing, then you might enjoy the archival print of Chechuan Market Square. And if it’s the architecture that gets you going, then Breton Reflections is bound to interest you. Regardless, we wish you a happy, healthy and uplifting season of peace.