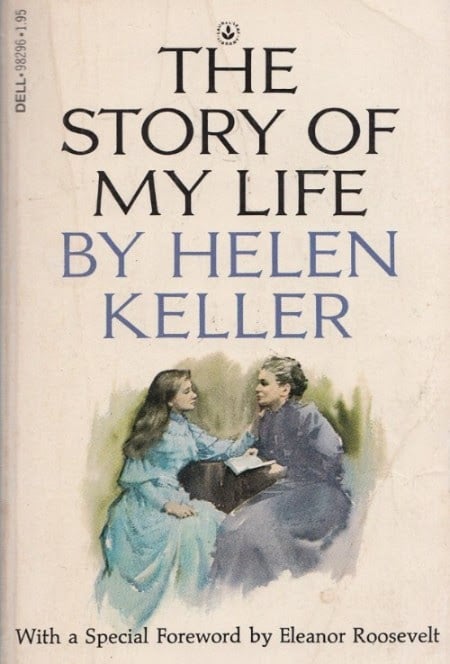 A Bubble of Consciousness

“Suddenly I felt a misty consciousness as of something forgotten — a thrill of returning thought; and somehow the mystery of language was revealed to me.” — Helen Keller

Clark Hulings’ work graced the covers of hundreds of books during his years as a professional illustrator. The literature represents the full range, from fun pulp novels featuring saucy love interests, to spine-tingling thrillers — this was our escapism before TV, let alone the internet, became firmly entrenched in our lives—but it also extends to some absolute classics of American culture.

A World Full of Names

Helen Keller’s story of how she regained language after losing her sight and hearing from a childhood illness is a remarkable one. Her teacher Anne Sullivan is credited as the person who drew her out of isolation through teaching her finger spelling and drawing her back into a world where things have names. In a full-circle for the world of communications, Sullivan was introduced to the Keller family by Alexander Graham Bell, the inventor of the telephone. Her early life was memorialized through William Gibson’s 1951 play The Miracle Worker which was revived on Broadway for a 50th anniversary. The play was based on Keller’s autobiography The Story of My Life written at 22 in her own words, typed on her own typewriter. A graduate of Radcliffe, Keller was the first deaf-blind person to earn a B.A., followed by honorary doctorates from Temple and Harvard; Delhi University in India, and Witwatersrand University in South Africa. She became a humanitarian, prolific author, social activist, advocate for people with disabilities, and she travelled the world.

This 1963 Dell paperback version of The Story of My Life  has a forward by Eleanor Roosevelt, a champion of Helen Keller’s. Clark Hulings’ cover illustration shows Helen and Anne working together, dressed in late 19th Century dresses, with Helen in a youthful and hopeful bright blue, her hair loose, and Anne in a more somber grey with her hair up. There’s a painterly suggestion of a background in the flowing olive brushstrokes around them, with a deeper tone in the space between them where Helen’s elbow touches Anne’s paper; a place where gesture and written language meet. On this cover, they are almost floating in the white space, with the hems of both dresses trailing down into brushstrokes, which is Hulings’ contribution to telling the story of the bubble of consciousness that re-emerged in Keller’s life when she met her teacher.

Although this edition of the book no longer sells for 50 cents, used copies of the version with the Hulings cover are still available on Amazon at very affordable prices. We are always on the lookout for the original illustrations of his book and album covers, so please do let us know if you know the whereabouts of this one. Helen Keller’s legacy continues in many forms, among them the work of The American Federation for the Blind, which has been digitizing the Keller archives to be accessible to sighted, blind, and deaf researchers.