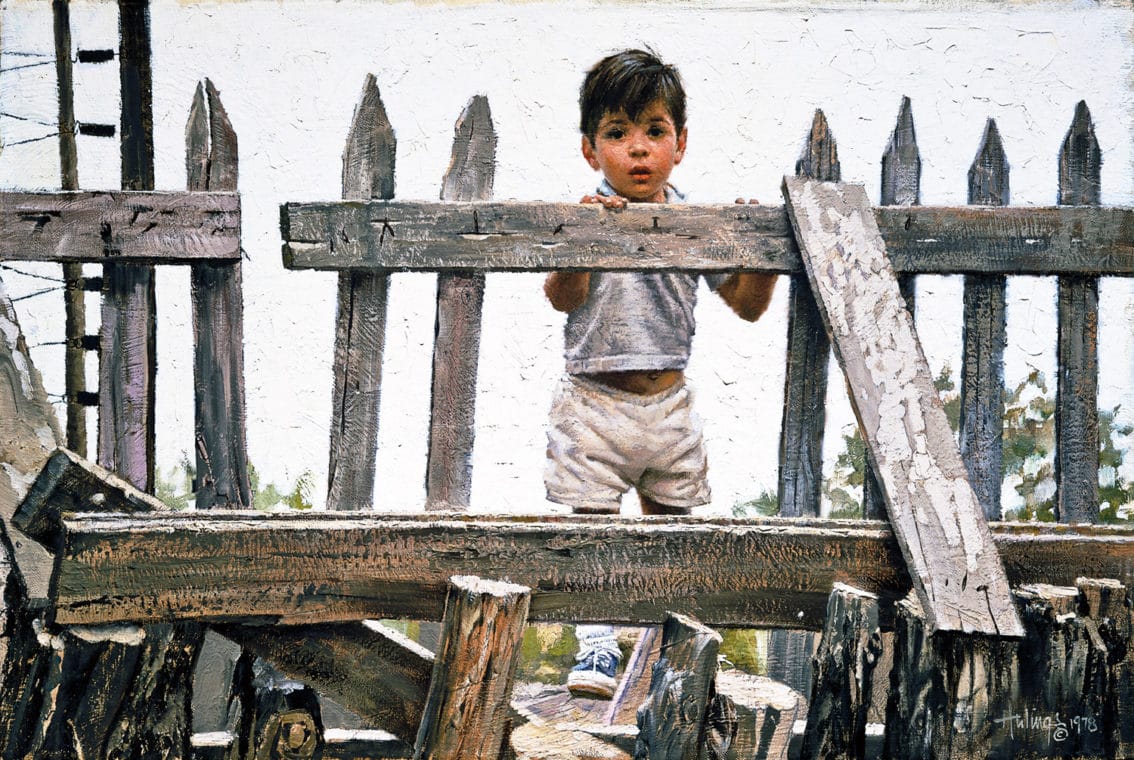 The little boy in this 1978 painting is now about fifty years old. Unlike his father, his hair is (or at least was) dark. Brothers named Vargas built the house I grew up in in Santa Fe: they were tall, with bright red hair and blue eyes. This Vargas boy clearly inherited his coloring from his mother’s family.

Vargas is a common name in New Mexico. One of its Spanish colonial governors was Don Diego José de Vargas Zapata Luján Ponce de León y Contreras. Born in Spain, he sailed to the New World to escape his debts —and his family. After stints in Oaxaca and Michoacan, De Vargas lobbied for, and eventually secured, the governorship of New Mexico, which he held from 1691 until his death in 1705. Diego de Vargas spent his tenure in New Mexico in one bloody battle after another, “subduing” the native population. Today Santa Fe’s original shopping mall is named after him.

This painting just seemed appropriate for this cold April day. The white sky implies imminent snow, but the little boy’s shorts and t-shirt suggest incautious optimism—a tilting at weather windmills…The half-finished fence shores up the point: the outfit was not well-reasoned.

This painting is classic Hulings in many ways: the subtle shades of grey and brown somehow working to describe a realistic scene; the fantastically charismatic face of José Antonio, which is such a terrific likeness of the actual little boy; the way the ladder calls your eye to the top left, and then the fence posts, boy’s head and stray plank cause it to drift diagonally down. In other ways, though, it is a departure: the main draw is at the center of the painting, and the only colors are in the face of the lone figure and his small blue running shoe just visible under the fence. This is as much a portrait as it is a genre painting. As such, it’s a showcase for all of Hulings’ skills, and as usual, Hulings manages to place humanity in squarely in the center of it all, without making it more or less than the world it inhabits.

If you’re interested in a Hulings work that’s set in Santa Fe and has family connections, The Spanish Shawl is available as a signed archival print at our Etsy Store  with a 20-percent discount in time for Mother’s Day shopping. This shawl belonged to Clark’s mother’s grandmother, and in this piece, is being worn by Elizabeth.