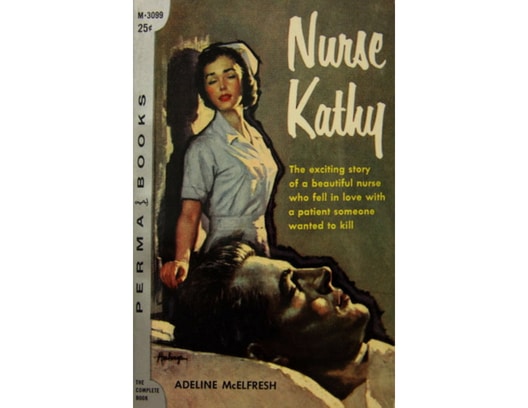 “The story of her patient’s amnesia is told by the shadow on his face, and no matter how long she’s been on her feet this shift, she is rosy-cheeked, and her lipstick is on-trend.”

As I am away this week, our Account Manager Penelope has written this week’s post: hope you enjoy it! — Elizabeth

Adeline McElfresh may not have been in the ranks of the very best authors for whom Clark Hulings illustrated book covers, but she was incredibly prolific, especially in the medical-meets romance genre. She wrote fiction under pseudonyms including Jennifer Blair, John Cleveland, Jane Scott, and Elizabeth Wesley; and also worked as a journalist and children’s author.

Nurse Kathy was published in 1956 by Permabooks, the paperback division of Doubleday. McElfresh was very progressive, as she also had many books that featured women physicians, but this one ties into the mystique of the heroically feminine nurse. From the icon of Florence Nightingale, or the pioneers like Margaret Sanger or Sojourner Truth, to the fictional Major “Hot Lips” Houlahan or flawed Nurse Jackie, there’s something deep in our culture that loves the idea of a fearless female healer. In the fictional versions, she is also beautiful, despite or because of the sacrifice.

My grandmother was a nurse in England during WWII and was excellent with triage; she worked in the London Underground tunnels as casualties poured in during the blitz. She came up the grueling days of the profession, where low-ranking nurses still mopped hospital floors as modern ideas of infectious disease control through hygiene were put into rigorous practice. Although I have a successful physician as a mother, as a kid it was nursing that seemed so magical; I read Helen Dore Boylston’s 1936 Sue Barton, Student Nurse with rapt attention to the hierarchical system of color-coded uniforms and varying band widths on the cap, the passion of the nurse’s emotional connections with the patients, and the eventual inevitable rescue by a handsome doctor-guy.

This is a striking illustration. These hard black shadow outlines that look almost like collage or cut-outs appear elsewhere in Hulings’ work, including in some of his later easel paintings. Here they show great 1950s pop-art drama. Nurse Kathy has brought the light with her as she opens the door. The story of her patient’s amnesia is told by the shadow on his face, and no matter how long she’s been on her feet this shift, she is rosy-cheeked, her lipstick is on-trend, and she looks equal to the task of the thriller plotline ahead of her. Hulings would have blocked in the font as well — all angles, no curves.

Many of the original illustrations of Hulings’ 1950s book and album covers are still at large; do you know where this one is?