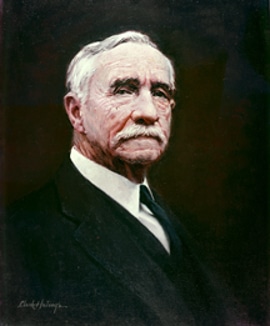 I do not know this man’s name, but I do know that he founded the Abbeville Building and Loan in 1890, and that my father painted his portrait sometime between 1947 and 1954. Clearly he was quite young when he founded the savings bank in Abbeville, Vermilion Parish, Louisiana.

My father lived in Baton Rouge, LA for several years after World War II, and he made his living there as a portrait painter. Subjects ranged from debutantes to matriarchs, from corporate leaders to politicians, including two sitting governors. Each unveiling of a prominent citizen was heralded in the Baton Rouge Register, and my father was often called upon to offer quotes and interviews. Many sittings were required to complete a portrait like this one, usually taking place for a couple of hours at a time, over the course of several weeks. Naturally, my father got to know a fair amount about the people who sat for him, their lives, their work, their families and colleagues. However, while there is no binding code of ethics for portrait painters, painter-client privilege is expected, which must have frustrated the “Toast of the Town” writers, especially when the subject at hand was a frequent mention in their missives. I doubt that this sober-looking gentleman would’ve provided much fodder for them, though, even if my father had revealed the conversations they had while he memorialized him in oil paint. Of course, you never know…

Abbeville is the seat of Vermilion Parish, which sits on the Gulf Coast, in the middle of Cajun country. It has suffered terrible erosion since hurricanes Katrina and Rita, with whole swaths of the coastline swept away completely. That said, the Abbeville Building and Loan remains in operation. Its president and other senior officers are now all women, but the products offered would be quite recognizable to its founder. The entire population of Vermillion Parish was invited for cake on the 125th anniversary of Abbeville Building and Loan in 2015.

Although the primary market value of commissioned portraits is to family and friends who know the subject, we’re always interested in Hulings’ Baton Rouge late 40s – early 50s-era portraits, and they pop up in auctions and private collections from time to time. Do you have one?