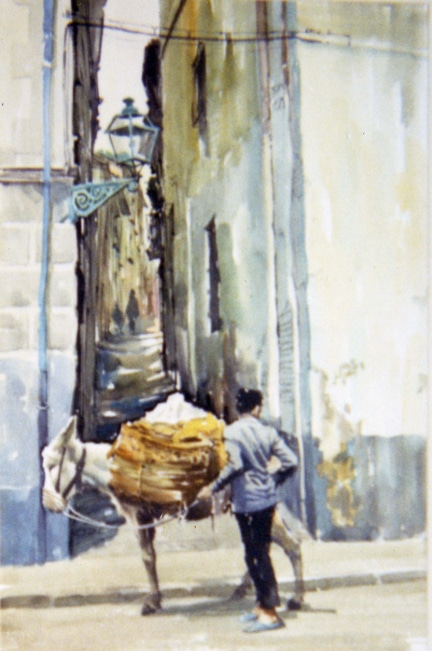 “This little gem was included in my father’s 1964 solo watercolor show in Tulsa, Oklahoma, from which it vanished into a private home.”

Boy do I wish I had a good image of this watercolor! It is of Southern Italy, no doubt about that, and my father most likely painted it in November 1955, as he made his way down from the Alps all the way to Sicily. It is probably of Sorrento, where he spent a couple of nights before continuing his drive South.

All of Italy is obsessed with fashion, and this region is where the cutting edge styles of runway shows used to be built (now that happens in China). It’s hard to miss the outfit on the person holding the donkey’s reins: blue jacket and matching espadrilles. Definitely fashion-forward, even today. The image is so blurry that it’s even possible this is a woman holding the reins—there is a hint of bun at the back of the head—although I’m pretty sure no woman in Southern Italy at that time would have worn pants and a blazer on the street. At any rate, it looks like the person has been hailed, or has turned to look back in response to some noise. Or perhaps he/she has been tasked with holding those reins while the owner has run off to take care of something. Either way the donkey couldn’t care less. It’s a funny moment.

While in Sorrento, my father ventured into Naples, still quite rough from the battering it took during the Second World War, and he visited Pompeii. It’s a poignant time to reflect on his stories of the evidence of Mount Vesuvius’ destruction of Pompeii in 79 AD — in spring 2018 we are thinking of Kilawea’s recent erruptions in Hawai’i and Volcán del Fuego in Guatamala. This is what he had to say about Pompeii:

“I arrived there at 2:30 this afternoon and spent about 2 hours there looking at the ruins. It is certainly an interesting place. I didn’t realize that the town was covered by a 4-day rainfall of volcanic ash. I had always pictured molten lava pouring down from the mountain. Most of the 3,000 deaths were caused by asphyxiation from the dust and poison gases.”

This little gem was included in my father’s 1964 solo watercolor show in Tulsa, Oklahoma, from which it vanished into a private home. Do any of you know where we might find it? I would love to have a better image, and know once and for all if those are women’s or men’s espadrilles.