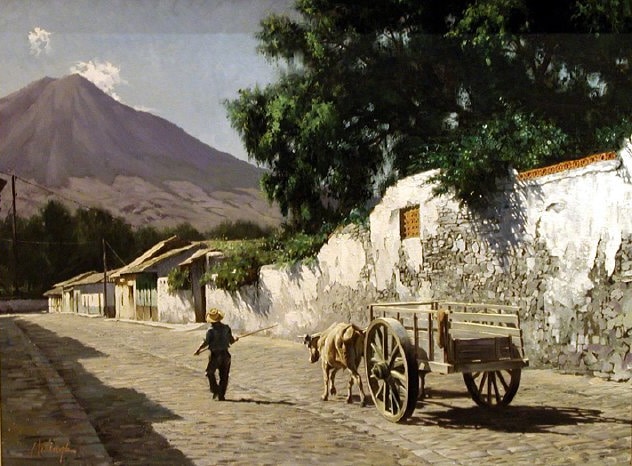 “Hundreds of firefighters and rescue workers face impassible roads and destroyed bridges, and over 3,000 residents have been evacuated…”

Our hearts go out to the communities affected by the eruptions of Volcán del Fuego, not far from the volcano in this painting, where at least sixty-five people have been killed and close to 200 are still missing. The lava flow from one of the most active volanoes in Central America near Guatemala City buried the village of El Rodeo and blocked access to nearby La Libertad; other towns affected include Alotenango and San Miguel los Lotes. Hundreds of firefighters and rescue workers face impassible roads and destroyed bridges, and over 3,000 residents have been evacuated, many of them covered in ash and fearing the worst for their family members. President Jimmy Morales has declared three days of national mourning. A New York Times piece references the severity of the situation, quoting “We saw bodies totally, totally buried, like you saw in Pompeii.”

Looking back at a moment of peaceful daily life in this resilient country, The Bullock Cart was completed in 1965 following a trip my father took to Southern Mexico and Guatemala. In many ways it is quintessential Hulings, except for the ox pulling the cart. Typically, of course, we would see a donkey doing that work in a Hulings painting. Also typical, though, is that my father captured the everyday reality of life in this painting — oxen are very common in this part of Central America.

This small country is home to 23 different ethnic groups, Caribbean and Pacific beaches, Central America’s two tallest peaks, and 37 volcanoes. Guatemala’s volcanoes are part of the Ring of Fire that surrounds the Pacific Rim. The country is so rich in volcanoes that it’s hard to avoid them — even when one has climbed onto one volcano, another is usually within sight.

Guatemala is also a land of bright colors and big contrasts, and its remarkable beauty belies a long and difficult past. My father, true to form, depicted this man, his ox and his cart in the shadow of Volcán de Agua, which rises 11,500 feet above the Pacific Ocean, only a few kilometers from the historic colonial city of Antigua. Two hardworking beings in a land of large events that inevitably effect them.

The Bullock Cart hangs today in the Booth Western Art Museum in Cartersville, Georgia. About an hour outside of Atlanta, The Booth is a 120,000 square foot behemoth — the largest of its kind. It contains a staggering amount of top notch art from all over the Southwestern United States. Collections range from American West historical, to Civil War, to Western Contemporary.

There are several ways to help the current crisis: one of them is to donate to the Guatemalan Red Cross, and PBS also has a list of aid options.