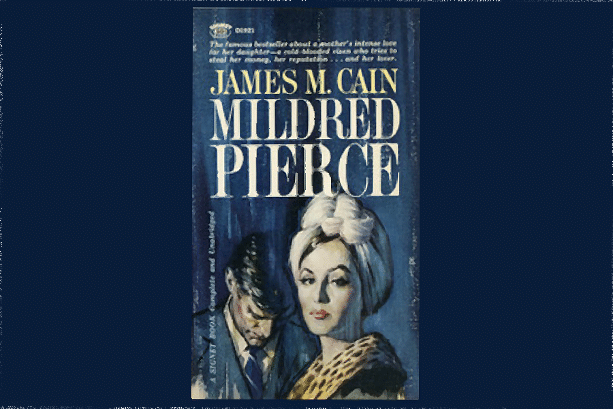 “Hulings has set the scene with the downward pull of the folds in the blue curtain in the background: it’s moody and full of intrigue. Mildred’s face is the brightest thing on the page, as if she’s commanding all the light in the room.”

It really is incredible how many iconic stories Clark Hulings touched as a professional illustrator. Just as Raymond Chandler’s harboiled crime novel The Big Sleep became more widely known for the film version featuring the starpower of Bogart and Bacall, James Cain’s Mildred Pierce was made into a now-classic film by Warner Brothers starring Joan Crawford. Crawford won the Academy Award for her role. You could hardly call these 1940s “Film Noir” movies dated: the high-contrast black-and-white look, the stylized acting, the detectives, the “dames,” and the costumes, all define a classic genre that is still with us now. Because James Cain was also the author of The Postman Always Rings Twice and Double Indemnity, you can make a strong case for Cain being the leading author of the genre.

Hulings’ cover of Mildred Pierce shows Mildred and a man—who is likely either her ex, Monty, who she ends marrying and then divorcing, or Bert, her other ex who she ALSO later remarries. Either one of them might be the one standing behind her with his eyes cast down. Hulings has set the scene with the downward pull of the folds in the blue curtain in the background: it’s moody and full of intrigue. Mildred’s face is the brightest thing on the page, as if she’s commanding all the light in the room. Her turban, a staple of Western glamour in the 40s, makes her reminiscent of François-Pascal-Simon Gérard’s portrait of Eléonore de Montmorency, or she may even remind us a little of Vermeer’s Girl with a Pearl Earring. It’s an interesting example of how Hulings’ fine art references were in play throughout his illustrator years. In other fashion statements, Mildred’s leopard stole suggests that she’s predatory, and Hulings has given her deep contouring in the cheeks, accented eyebrows, smokey eyes, and light pink lips…the full diva makeup palette.

Although there are a handful of different cover illustrations out there for this book that range in style from Art Deco to Cubist, the Hulings version done for Signet—an imprint of Penguin—is true to the noir genre. When it comes to tracking down these original illustrations, we’re as hardboiled as they get. In lieu of knocking on our wooden office door with a clue, if you know the whereabouts of this one, you can send us a note here.