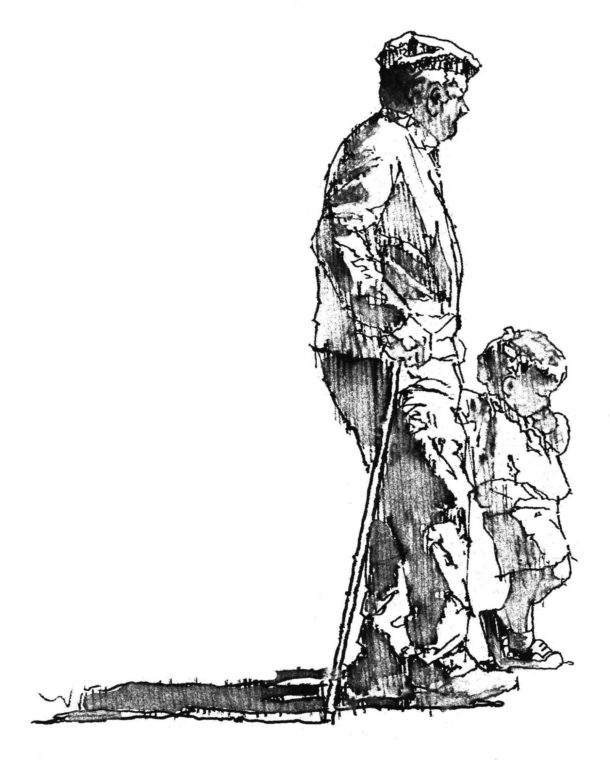 A Walk with Grand-Père

“Although the overall effect is intentional and specific, the pen-strokes look free and easy and you can envision the artist’s hand at work.”

This lovely drawing was part of Hulings’ 1999 Catalogue; it was one of several French works in this one-man show. As France is still fresh from their world cup victory this summer, we thought you might enjoy a quiet European moment with these two.

Although this is definitely a fine art piece, you can see that Hulings has drawn upon some of his skills as an illustrator here as well. Although the overall effect is intentional and specific, the pen-strokes look free and easy and you can envision the artist’s hand at work. The story of the grandfather and grandson’s stroll together is shown through their placement on the right side; they are in progress with their walk, and on their way out of the frame. The light is directional, showing both figures cheerily illuminated from the right and casting a shadow to the left.

The man would be very fashionable now in his flat cap. There’s something poignant about seeing his cane—we can imagine that it takes a little effort to get out to spend time with the boy, and that the day will come when his little grandson can outpace him; but not today. While the parents may be out working or doing household chores, these guys have the chance to take their time and enjoy the morning or evening light and perhaps pick up a baguette on their way home.

This is part of the unique role of grandparents in children’s lives: with more time and energy to spare than they probably had in their years as parents, grandparents bring love and knowledge from a different generation, and grandkids bring affection, mischief, and an innate understanding of cellphones.

As Hulings fans may already know, he used source material in a variety of ways —a person, animal, or scenic element might pop up in a new form in a different scene. If you look at A Walk with Grand-Père drawing in the 1999 Catalogue, you’ll see that it’s placed next to La Bajada. Although this painting is set across the world in Taxco, Mexico, you’ll notice a similarity in the composition that features a father-son walk in progress into the light from left to right, and a feeling of kindness and mentorship between generations.