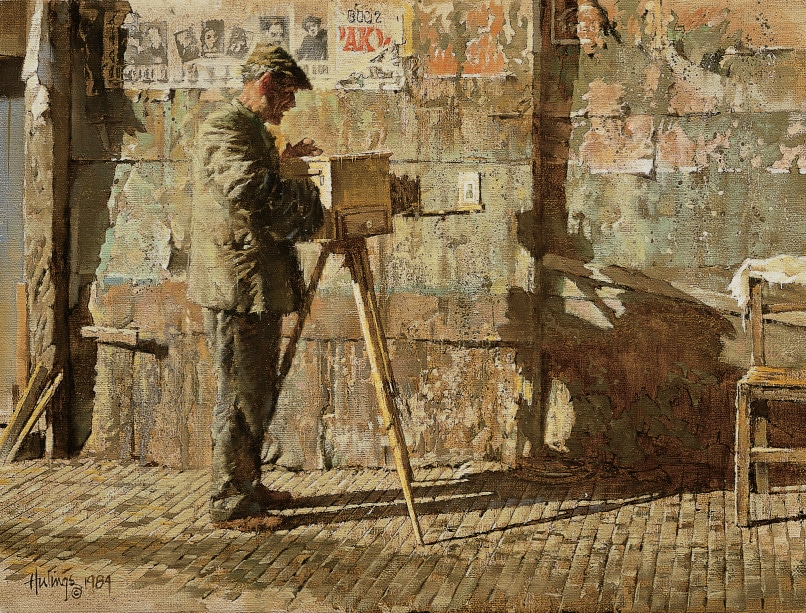 “What appears to our eyes as ‘real’ in a painting has, in fact, been cobbled together from abstract elements. This is an artist’s alchemy: the transmutation of something basic into something valuable and meaningful.”

Many of Hulings’ works depicting the former Yugoslavia are from earlier in his career: there’s a beautiful series of watercolors and drawings from his travels there from 1959–1960. This 1984 painting shows the maturity of his midlife work, but still pre-dates some of the worst conflict in the region in the early 1990s. It’s a snapshot of an older time.

In Hulings’ Own Words:

“In our day when sophisticated copy equipment and photographic processes are commonplace, it is interesting to come upon an old street photographer who earns his living with an ancient view camera. He makes copies of daguerreotype portraits and documents for people, using the sun as his source of light. This painting is of such a man standing in front of a shabby wall. The remnants of placards and poster clinging to the wall make a lovely textured background.” Clark Hulings A Gallery of Paintings p 58.

The daguerreotype was one of the first photographic techniques; invented in France by an artist-chemist, it became popular in the mid-1800s. The fragile prints on silvered surfaces required mercury to develop, and they take up to five-minutes of exposure time, which is rough on a portrait subject. Although the technique does occasionally crop up in contemporary practice for the interest and nostalgia of the wavy mirror effect, it’s now largely obsolete. The photographer in this painting was already practicing an obscure art. It’s even more interesting that it was painted in 1984, a year George Orwell entrenched in twentieth century imaginations as representing “the future.”

From Lead to Gold

Yugoslavian Street Photographer shows truly masterful chiaroscuro. The play of light and shadow highlights the daylight needed to make the daguerreotype, and suggests a setting sun, where time is running out. The focused palette of olive, brown, and red keeps things deceptively simple and shows integration between the man, his equipment, and his world. As Hulings points out in his own commentary, the textures on the wall are fascinating. The posters in various stages of weathering blend into the stonework below. The figure is emerging organically from an abstract environment, reminding us that there’s a very fluid line between them. What appears to our eyes as “real” in a painting has, in fact, been cobbled together from abstract elements. This is an artist’s alchemy: the transmutation of something basic into something valuable and meaningful. It’s a nuanced process that reaches beyond labels of abstract or realist, and goes to the heart of the artist’s creative drive. Hulings is actively playing with the spaces between the literal and the metaphorical, and confidently drawing our attention to it.

A World of Images

The old posters show that our photographer is working in a world full of images, where graphic designers, printmakers, and promoters had a job to do to share information about current events. But it doesn’t look there’s there’s anything too current there now. The wall is in disuse, save for the recognition of the photographer, who looks like he is rephotographing an image on the wall, and Clark Hulings, who has noticed him, artist-to-artist.