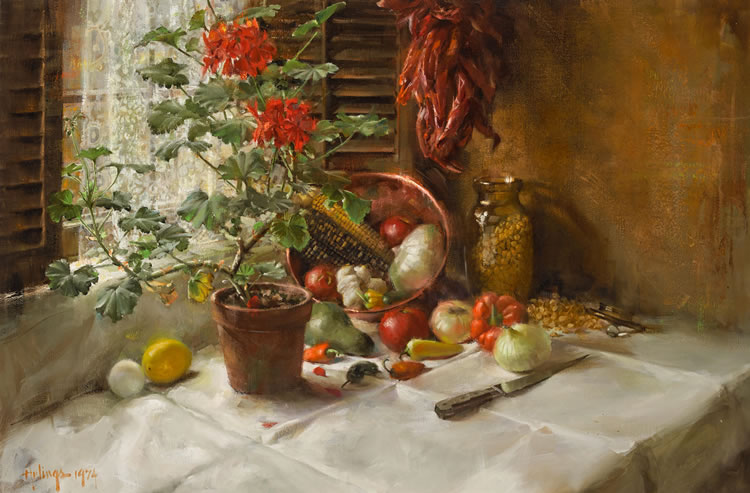 “The large knife does cause me to question the artist’s state of mind for a moment, though!”

Last week we focused on a major work coming up at auction which includes some still life within it. Santa Fe Kitchen Corner is all still life, and it’s also on the summer auction schedule, this time in San Francisco.

Santa Fe is in the title, although it’s not really necessary because the elements make its pedigree obvious, at least to anyone who’s at all familiar with New Mexico. Geraniums, corn, and ristra (the arrangement of drying chili peppers) are classic New Mexico elements. The large knife does cause me to question the artist’s state of mind for a moment, though! Despite the fact that it’s an item likely to appear in a kitchen scene, its blade-out placement in the foreground gives the painting an “edge”. It’s a good reminder that, although Hulings work is beautiful and often classic, it’s not tame. It’s also Hulings’ way of inserting a human presence—someone is clearly about to cut up those vegetables.

It’s the height of summer in New Mexico, and this painting’s bright window light and palette of reds and oranges, not to mention the chillies, give us the feeling of heat. We can often play “spot the red accents” in Hulings’ work, but in this case, they are not a secret! Even so, they are carefully placed, with stray geranium petals falling into the pot and onto the tablecloth, and the produce showing different shades at various stages of ripeness.

Just like in the still life example we saw in the spring at the Scottsdale auction, you’ll notice Hulings letting loose with the textures and colors of the wall, and then changing pace with the almost liquid look of the white tablecloth punctuated by square fold marks. The contrast of the sharper realist rendering for some elements, and the painterly flow for others, is also typical of his work. Most interesting is his decision not to show us the top of the ristra or the window or the plant. Hulings is keeping our gaze right where he wants it to be: on the items in the copper pot.

This 1974 beauty will be auctioned by Bonhams San Francisco on August 7th. If it’s caught your eye and you’d like an introduction to our colleagues at the auction, send us a note and we’ll put you in touch.

If you’re in the market for a reproduction, we have one still life giclée in the Hulings store on Etsy and it’s a beauty as well: White Roses with Onion has a much cooler palette.