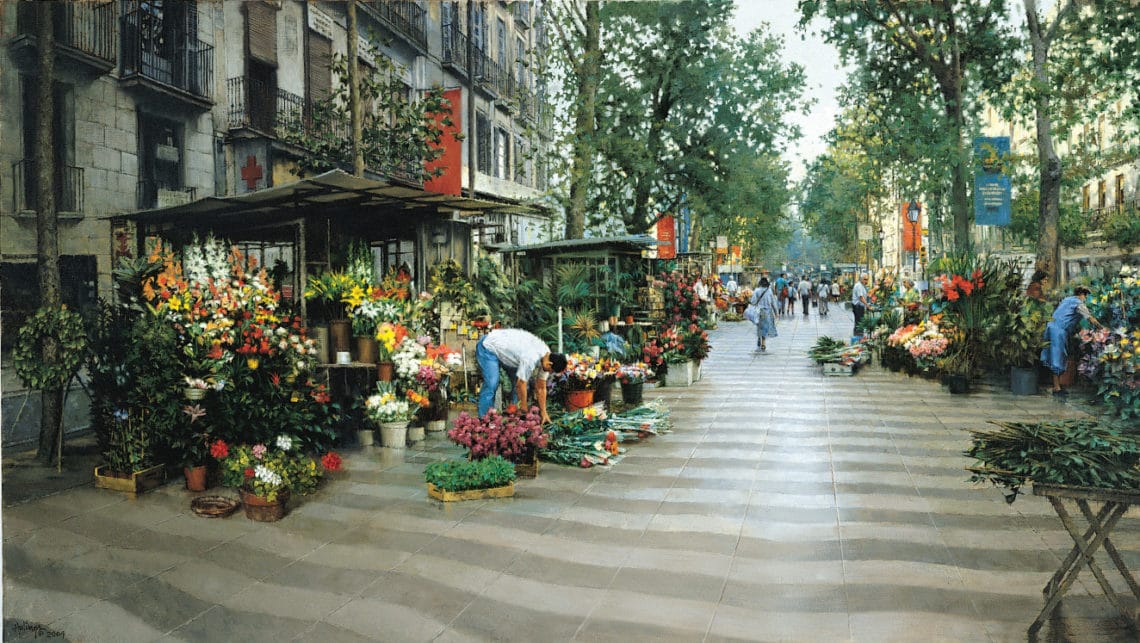 “The most interesting time of day for this pedestrian mall is early morning. The mist has not yet burned off. Flower merchants are setting up their stalls, Barcelonans are walking to work and tourists are still in bed.”  —Clark Hulings, Timeless Beauty: Pursuing Life’s Textures

Clark Hulings loved painting market scenes, and they are recurring subject matter in his easel work from the 1960s to the 2000s. For an artist never content to rest on his laurels, markets brought the technical challenges of complexity, engaging color value choices, and a dynamic sense of movement in the composition. They also reflect Hulings’ ongoing interest in people engaged in their work, cultural specificity, and the respect for the life cycles of agriculture and commerce.

In a career that includes so many masterful market paintings, Las Ramblas is an absolute standout. It’s crisp and high-contrast, befitting its sophisticated urban European setting. The distinctive wave-striped pavement wraps around from the bottom left and swirls the viewer’s eye into the heart of the action. The most vivid flower detail is on the stall with the white-shirted man in the foreground left, and from there several other human and floral scenes unfold down the street as we follow the shine in the center of the pavement. In a move that is distinctly Hulings, you’ll see that the overhead leaves of the trees are loosely-rendered with visible brushwork texture, so they frame but don’t distract from the rest of the scene.

Catalonia is one of several autonomous communities within Spain, and it boasts a world-class capital: Barcelona. A striking visual feature of the city, as well as its famous Gaudi architecture, is the tree-lined central boulevard. You’re as likely to see local abuelitas enjoying a late-night drink together as you are to meet tourists from all over the world when you walk on “La Rambla.” More affectionately and locally known as “Las Ramblas” as Hulings has titled his painting, it’s an almost mile-long street with several named sections—this section is likely the Rambla de Sant Josep or de les Flors, the open-air flower market. The poet Lorca, who was introduced to Barcelona by his friend Salvador Dali, famously said it was “the only street in the world which I wish would never end.”

Art collectors, take note: on July 28th, 2018 The Coeur d’Alene Art Auction in Reno, NV will be selling Las Ramblas along with last week’s featured Hulings painting, Grand Canyon. If you would add the beauty of Barcelona to your collection, just send us a note and we’ll put you in touch with our colleagues at the auction.

Las Ramblas is the cover image of Hulings’ 2007 Catalogue Timeless Beauty: Pursuing Life’s Textures, and that is an on-budget way to enjoy the scene anytime.