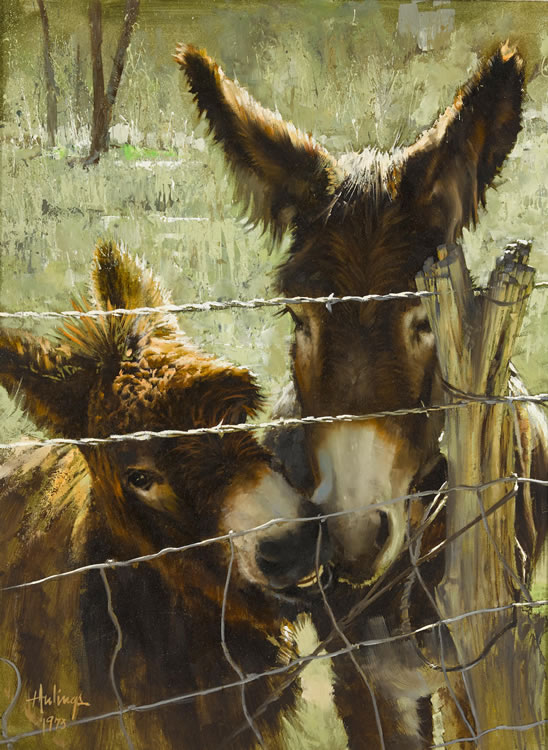 Update: this piece succesfully sold at Bonhams San Francisco in August 2018, and we were happy to hear that the donkeys have a new home.

“There’s so much detail that you can see a faint green color around the mouth of the one on the right, who has likely just enjoyed a mouthful of grass.”

This is a terrific painting from a technical perspective. It features the classic Hulings subject matter: donkeys. However, the composition is unusual for him. We don’t often see this portrait-style, up-close and personal study of faces. There’s so much detail that you can see a faint green color around the mouth of the one on the right, who has likely just enjoyed a mouthful of grass. The smaller donkey is gently butting in from underneath the lower left corner of the frame, making a negative-space triangle between their two shaggy heads. There are several more triangles to be found in the composition: in their ears, the notch of the fence, and the ‘V’ shape of the trunk of the tree behind.

You might also notice the layers of textures here, with a rough suggestion of scrubby grass in the background showing off the backlit shag of the donkeys’ coats. The image isn’t all cuddly, though, because the horizontal lines of the barbed wire cut across, showing the limit of where the animals are allowed to go. Perhaps they are socializing with someone on the other side of the fence. Unlike horses, donkeys are not easily startled, which makes them a little more curious and interested in exploring.

This piece was painted in 1973 and then featured in the 1974 National Academy of Western Art (NAWA) show. The National Cowboy and Western Heritage Museum has been an important player in Hulings’ career, awarding him the inaugural Prix de West prize.

We’re very happy to see Donkeys Nuzzling featured at auction with Bonhams San Francisco on August 7th, so these donkeys could be yours—just send us a note and we can put you in touch.

If you prefer reproductions, we have a number of archival prints and giclées to chose from. We’re even featuring 25% off all of the burros and donkeys in the Hulings store at Etsy with the coupon BURRO25.