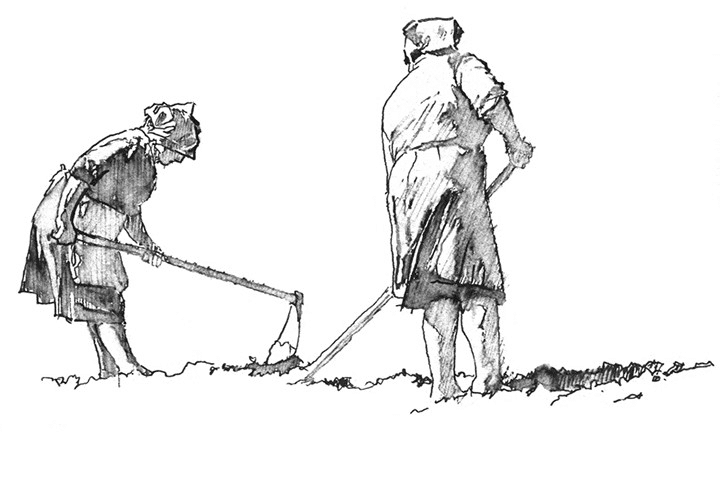 Here’s a small drawing my father did to illustrate the catalogue for his solo show in 1999. He did a bunch of them, and sold them all at the opening, alongside 35 major oils and twenty “sketches,” which is what he called small plein air paintings. These drawings range from working scenes like this, to majestic trees, to single roosters pecking at something.

To my father they were all “compositional elements” that he captured for use in larger works. The rooster might appear in the lower right corner to pull the viewer’s eye and anchor one end of a diagonal line that was essential to the composition. Even an orange, or a baby’s pink sweater could serve an important function — a little pop of color to focus attention in one area or encourage the eye to sweep around the canvas.

My father kept tens of thousands of slides that he referred to for these purposes. We cross-referenced them by location, subject matter, and compositional structure. The main category “DONKEYS” included 52 sub-categories such as: “rainy”, and “walking uphill away”. They were also tagged by country or even town within a country. That way, if he was working on a large scene full of steps in early morning light that needed additional interest, he could quickly lay his hands on dozens of potential figures that were all lit from the side and seen from above. He often still had to redraw them, but at least the perspective would be somewhat helpful in deciding what to add.

These two ladies have no idea the purpose they may have served in a Clark Hulings painting. They are just trying to finish the job so they can move on to the next row, or task.

Where is this drawing now? I wish I knew.