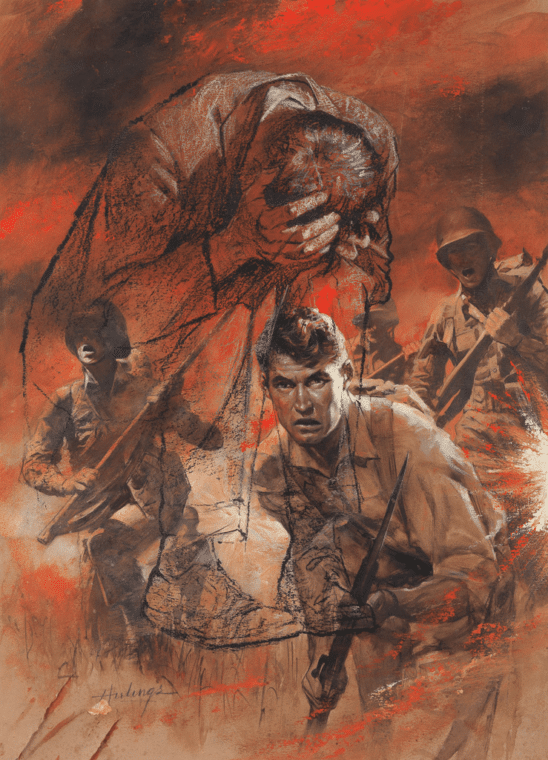 Here’s an unusual one that I just found out about. It’s up for auction through Barnabys. Hulings’ commercial illustrations do surface from time to time, and often, I know about them or even have a copy of the book for whose cover the art was created. This one is different.

This illustration is mixed media, charcoal, and gouache on board, which is very unusual for my father – he almost never worked in gouache. It’s a pretty good size (22 x 16″), but it does not begin to cover the entire board on which it was created (30 x 22″). This is also unusual, because my father tended to prepare real estate that was the size he planned to use. Of course, this was a commercial illustration project, which means time would have been short, and since it was for a magazine, time would have been even shorter, so I’m sure he used what he had on hand.

All of this leads me to believe that it may have been a preliminary sketch for the final illustration. Marks and notations scribbled on the board outside of the picture are even more reason to believe it was a sketch.

All of that said, there is no question that this is a work by Clark Hulings. The signature is right, and so is the rendering of the head in hands and the fully realized face at the center. I wonder what the article it accompanied was all about.

Another reason this piece is interesting is because it was done for the magazine For Men Only. My father mostly freelanced for book publishers (Dell, Cardinal, etc.), although he did work on LPs, and apparently this “adventure” publication as well. In 1959, For Men Only really was an adventure magazine, employing many young writers who went on to great fame (Mario Puzo, Mickey Spillane, etc.). By the 1970’s, it had morphed into a pornographic rag, but by then, my father was no longer working as an illustrator at all, let alone for them.

Check out the lot on Barnabys if you want to bid on this piece. Don’t wait long, though, the auction closes on Mar 14. And if you do acquire it – please let me know!