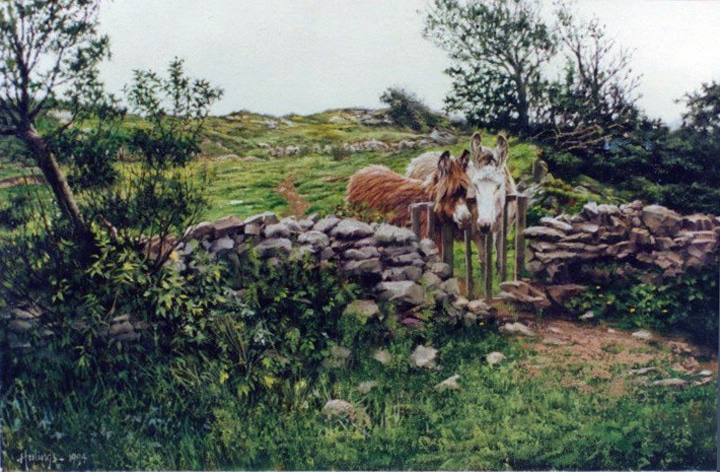 A Nod to the Irish

Happy Saint Patrick’s Day! This day is kind of important around our house because, while he is not Irish, my husband is named Patrick (and he does tend to have people trail after him…).

I love this little painting. It’s of Ireland, obviously, and was painted in 1994. I remember spending three weeks driving all over Ireland. We started in Shannon, on the West coast, and drove south to the Ring of Kerry. Then, we headed inland and drove back up North through Galway and then into Northern Ireland.

One vivid memory of the trip was of a “bed and breakfast” near Kerry that was actually a working dairy farm with rooms to let. There was one bathroom so we had to wait to wash off the dirt and grime of the road until the two little girls of the house had been bathed, and then until after the other two guests had had their turns. For dinner, we were served the toughest steak I’ve ever had the misfortune to try to eat. When our hostess left the room I tried to put it in the plant next to me, but discovered my father had already put his there! So, I put half of mine on his plate so it looked like we had each eaten something.

The dinner may not have been edible, but the breakfast was superb: Irish butter, Irish bacon, and Irish soda bread. Then, it was back onto the little, stone wall-lined roads in search of scenes like this one.