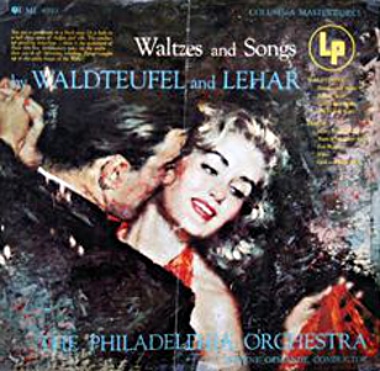 “It’s hard to believe that the waltz was once a scandalous newcomer.”

Waltzes are now classic wholesome holiday fare, and while we’re enjoying hearing Bing Crosby and Tony Bennett sing “The Christmas Waltz” on repeat at coffee shops, it’s hard to believe that the waltz was once a scandalous newcomer to the court dance scene in sixteenth century Austria and Vienna. The hold between partners was closer than ever before, and was considered immodest, the turning movements  were too wild, and the steps simple enough to learn that dance masters everywhere thought they’d go out of business.

Clark Hulings’ illustration for the cover of Eugene Ormandy and The Philadelphia Orchestra’s 1956 album “Waltzes and Songs by Waldteufel and Lehar” suggests romance and abandon. A modernist red accent is a Hulings trademark; used with subtlety in his easel paintings and boldly here in the woman’s halter dress. The dancing couple’s diagonal placement on the cover with his right and her left shoulder dipping down catches them midway through a turn. Hulings is always thinking like a painter, even in his earlier illustrations, and you’ll see that although our couple is shown in a figurative way, everything around them is splattered, contemporary, and shows an abstract expressionist influence, which gives us the feeling of flying around the dance floor.

Waltz music itself is memorable for the lilting up and down of the ¾ time signature. “The Skaters’ Waltz” by Émile Waldteufel is perhaps the classic, hummable song you’d think of if you imagined a romantic winter skating date complete with stylish coat and fur hand muff. You’ll recognize Franz Lehar’s waltz from his most famous opera, “The Merry Widow.” Budapest-born conductor Eugene Ormandy was with the Philadelphia orchestra for 44 years and led them to two Grammys and three gold records.

We were so fortunate to have a referral from Tina Roesler, a Freshly Revealed reader who has just opened a new gallery in Tucson: Gallery 2Sun. Tina introduced us to the work of Janet Borgerson and Jonathan Schroeder; they have recently become wonderful accomplices in our search for the original illustrations of Hulings book and record covers. Their book, Designed for Hi Fi Living: The Vinyl LP in Midcentury America, is hot off the MIT press. 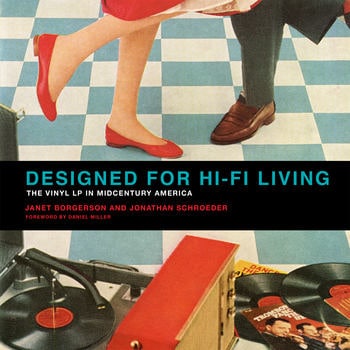