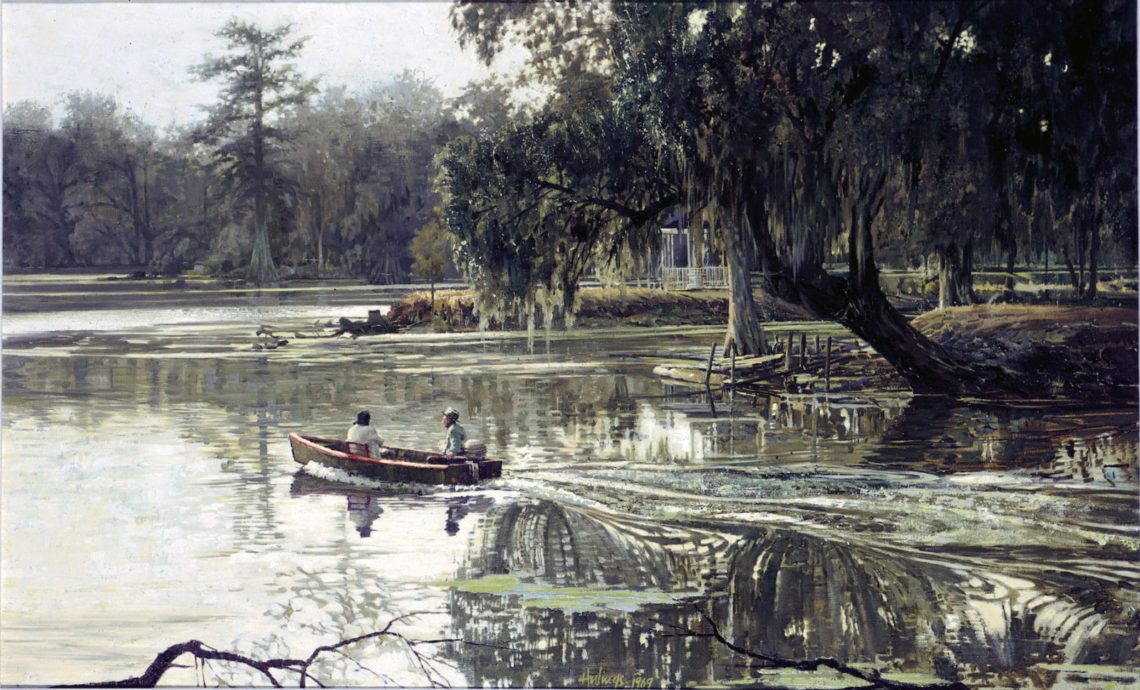 Relaxing on the Bayou

“This particular painting hung for almost 50 years in the living room of a dear family friend; I’m pleased to say it remains in Baton Rouge, in another private home.”

The days are growing shorter, the weather colder, and the pace is picking up as we barrel to the end of an incredibly eventful year! Seems like a good time to indulge in a visual tonic. Imagine yourself whiling away the hours fishing on the bayou. You packed a po’boy, or maybe a pain bagnat or muffuletta, there’s a six pack secured to a string that’s keeping cold in the water and you are enjoying the day with a friend.

Pierre Part is, of course, in Louisiana. It’s in Assumption Parish, about an hour south of Baton Rouge, to be exact. Pierre Part was founded in 1755 by Acadians, and almost every one of the roughly 3,000 people who live there are of French ancestry. It is completely surrounded by water, and was accessible only by boat until the middle of the last century. It floods, but it is beautiful — a world apart, and a lovely place to reflect on when one is slogging though year-end work projects and third grade school projects, and falling desperately behind on holiday preparations.

My father painted all over the state of Louisiana from the 1940s to the 1970s. This large composition dates from 1969, but if you visit today you’ll find the scene unchanged. The only difference you’d notice is that there is more Spanish moss, that lovely grey-green air plant that drapes itself on the live oaks. It was almost made extinct by the chemical factories that reined in the 50s and 60s, but since they have been made to clean up, it has returned to decorate the swamps of the southern United States, from East Texas to Florida. My father always loved it, because it is subtle, but textured, and can be added to great atmospheric effect.

This particular painting hung for almost 50 years in the living room of a dear family friend. Upon her death the family was forced to part with it, but I’m pleased to say it remains in Baton Rouge, in another private home. While the painting itself has not strayed far from the location of it’s subject, its image was recently featured in the book Shrimp Collards & Grits: Pullin’ Pots. This is a low country, South Carolina series, but that moss easily makes the journey. Switch the sandwich to a pimiento-cheese and you are good to go!