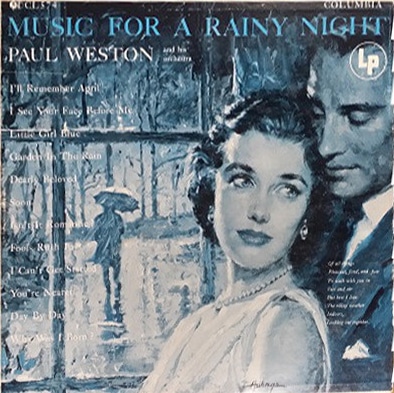 “Clark Hulings’ illustration for the cover of Weston’s 1954 “Music for a Rainy Night” was typical of the blue tint of similar “chill” albums in the early 50s.”

Known as the father of “Mood Music,” Paul Weston was a pioneer of the mellow, sweeping strings and mournful horn arrangements we associate with romantic film scores. He was music director at Capitol Records, then moved to Columbia Records; he was also the co-founder of the Grammy Awards.

Music for a Rainy Night

Clark Hulings’ illustration for the cover of Weston’s 1954 “Music for a Rainy Night” was typical of the blue tint of similar “chill” albums in the early 50s, such as Ella Fitzgerald’s “Songs in a Mellow Mood” released the same year on the Decca label. You can see in the artwork for this album that, unlike some of Hulings’ novel cover illustrations, our couple is looking very middle-class and ready for a respectable night in during the storm; she with her coiffed brunette hair and pearls, and he in his suit looking interested and focused. Hopefully, the martinis are chilling and she has two more cigarettes left in her art deco cigarette case.

Behind the Window Pane

Hulings’ brushwork is beautifully rough and painterly for the lonely figure through the window in the rain in the background, and the wet streets reflect lots of light through the glass. The design is perfectly composed so our eye starts in the upper left with the album title, then moves to the brightly lit face of the woman, up to the more shadowed man, and then wanders to the rainy scene behind the window pane.

The album is still available online and as it was originally recorded in mono, you’d get the authentic experience of some very relaxing orchestral arrangements of classic American Songbook composers such as Gershwin and Rogers & Hart.

If one of you reading this knows where the original illustration is, please let us know!