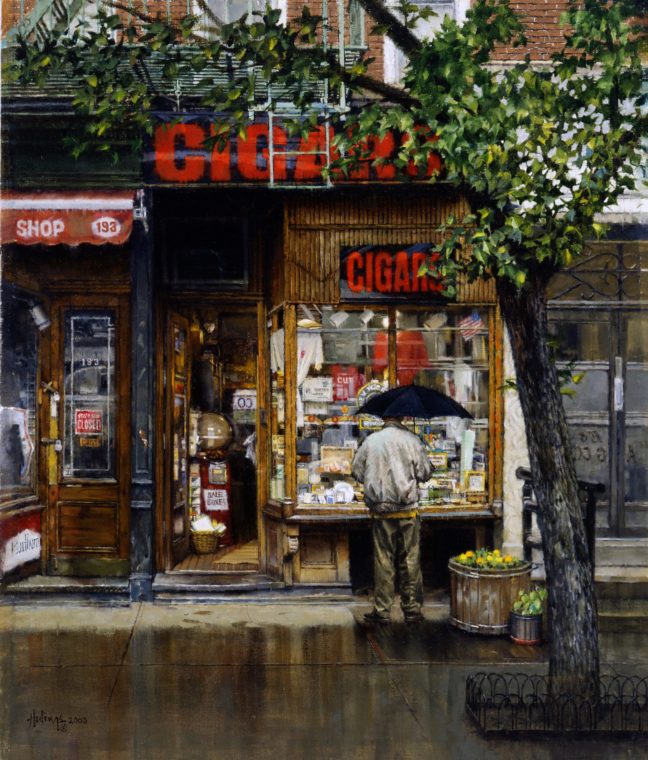 “My father rarely (and by that I mean almost NEVER) did self-portraits, but that jacket and that posture are evocative of the artist himself.”

This week we’re in a New York State of mind. The recent attack in Tribeca was a tough but encouraging reminder of The City’s resilience in the face of tragedy. We’ve just hosted 50,000 runners in our annual marathon, and are moving forward with the usual boisterous chaos that is city life.

My father painted Cigar Store in 2003; it’s a storefront in the West Village, we think on Mulberry or Bleecker Street. He brings just enough nature into the street scene with the deep green leaves of the tree partially covering the bright red ‘Cigar’ lettering on the signs, and the small color accents of yellow and orange marigolds in the flower pot. The tree trunk on the right is a frame within the frame, gracefully extending up to meet the fire escape. The window-shopping man with his black umbrella seems to be a true New Yorker, risking standing on the coal grate. These trap-door entrances are still all over town and used for deliveries and cold storage; some are more stable than others. My father rarely (and by that I mean almost NEVER) did self-portraits, but that jacket and that posture are evocative of the artist himself, and his favorite thing to do when in New York was to wander the streets, sometimes for entire days.

Hulings’ rain paintings are masterful studies of detailed surfaces and rich colors. The wet sidewalk becomes sleek and reflective, with its own color palette of gold, grey, and blue, and you’ll see that the wet surface stops where the awning kept ground dry just outside the store.

At Home with Joan

This painting is hanging proudly in collector Joan Bayer’s home office in Ohio, and there’s a fun story as to how it got there. Joan had dinner with my parents and me; as well as gallerist Jack Morris, at the Pink Adobe in Santa Fe. Later, in my father’s studio Joan spotted the almost-completed Cigar Store and knew she wanted it in her collection; he agreed to the sale and it went home with her in 2004.