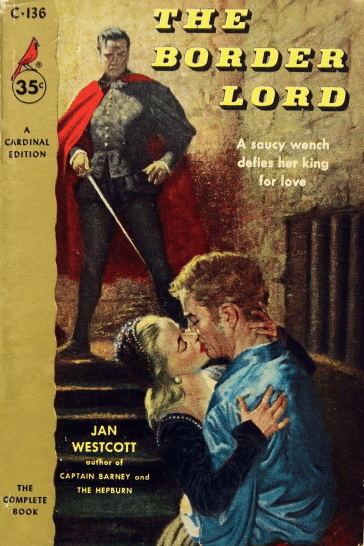 A SAUCY WENCH DEFIES HER KING FOR LOVE

The last illustration I covered for this blog was for a very serious book about genocide. This book is about the polar opposite, and the cover is one of my favorites because the Lord is so disappointed, and clearly has no idea what to do, even though he’s the one with the sword in hand. Haha!

The Border Lord was written by Jan Westcot. It was originally published in 1946, and my father illustrated the first Cardinal paperback edition in 1954. Jan Westcott was a fairly well-known romance novelist, with quite a following. This one concerns Francis Hepburn, who is the real King of Scotland, but who has been denied his heritage. It’s a romp through a Scotland that almost existed in the 16th Century, and it’s considered among Westcott’s best books.

I just laugh at the thought of my father having to read it on the fly, probably in one sitting, before sketching out possible titles to deliver to the art director the next morning. I mean the language is so leading that it immediately conjures up all kinds of images, but few could have been placed on the cover of a mainstream publication in 1954: “He was astride a black horse and Anne stared at him, at the big saddle, at the pistols thrust into the saddle holsters.” And that’s an innocuous sentence! The cover my father ended up with is by no means without innuendo. That sword is drooping, to say the least. Anyone know where the original artwork is? Let me know.

There is actually another book by the same title, written by Sophia James and published by Harlequin just a few years ago, which goes to show that some themes are timeless, however silly they may be.