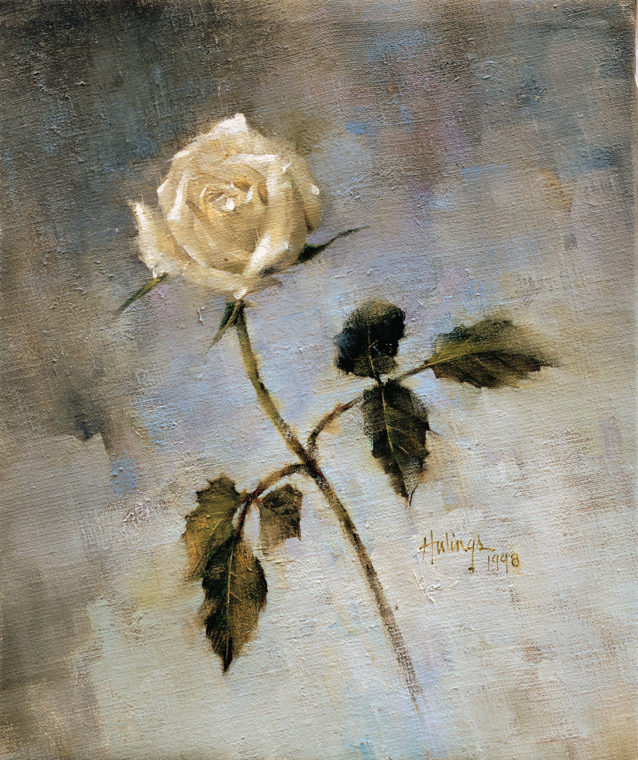 My father loved to paint roses. His first teacher, Sigismund Ivanowski, always had him paint them. He said it was because they are so difficult to represent properly – they are delicate, yet full of texture and they have unique, complicated structures. No matter how skilled the artist, it is always a challenge to paint a rose well. It’s a nuanced exercise in edges and values.

I understand all of that and, not being an artist myself, I accept the premise at face value. However, I always believed that Ivanowski had my father paint roses because they were available. My father studied with him as a teenager, after begging his father for art lessons. It was the middle of the Great Depression, and they were lucky to have roses on offer — paying for other models would have been out of the question.

Ivanowski was a Ukrainian painter who had studied in Warsaw, and was Court Painter to Tsar Nicholas II. He emigrated to the US after the Russian Revolution, and ended up living in Westfield, New Jersey, which is where my father spent his high school years.

What luck that a talented boy living just down the street wanted to study with him and could afford to do so during such bleak times? What luck that the boy’s father would happen to learn about the portrait painter-neighbor and agree to arrange lessons. Ivanowski had a major impact on my father’s eventual career trajectory, his ideas about art, and his particular interests. Had he not seen Hulings’ talent and conveyed that to my grandfather, it’s doubtful my father would have studied at the League with Bridgeman, or continued to pursue a career as an artist. Ivanowski was a linchpin. He died in 1944. The roses faded, but Ivanowski’s influence over my father never did. Case in point: my father continued to paint roses for the rest of his life, they became one of his trademarks.

This one, simple though it is, hangs in the air, the star of it’s own portrait.