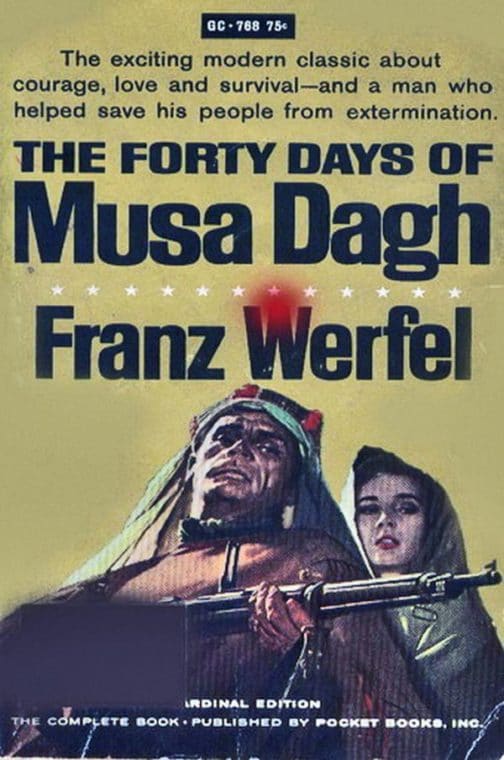 The Forty Days of Musa Dagh

UPDATE: Today, April 24, is the anniversary of  the Armenian genocide, in which over 2 million civilians were killed by the Ottoman Turks. After 102 years it is still a very hotly disputed issue. Turkey does not accept that it occurred, and still works hard to make others reject history as well. They were dealt a blow this week with the discovery ofa telegram has been found that serves as irrefutable evidence of the genocide. You can read more about that here.

As an example of how sensitive Turkey is about this, there are currently two movies in wide release that deal with the topic: The Promise, which is being lauded (except on Rotten Tomatoes, where 55,000 terrible reviews were posted after it was premiered to 2,000 people at Cannes….you do the math!), and The Ottoman Lieutenant, which is not being lauded at all. It tells the tale of an Ottoman army officer who carries on with an American nurse and saves Armenians from shadowy villains. The latter was funded by the Turkish government.

Clark Hulings did the cover art for hundreds of paperbacks between 1954 and 1967. The authors ranged from one hit wonders we’ve never heard of today to important contributors in their fields of history, mysteries, and what have you. Similarly, the subjects and themes ran the gamut from absolute romance pulp to weighty and even dry or religious-focused. This one is based on actual events, and is one of the heaviest.

Musa Dagh is the name of a mountain in Southern Turkey. In 1915 it was the site of a fierce, extended resistance (for 53 days, not 40, but one can certainly understand why the author made it 40 in his retelling) by the local Armenian population of 5,000 against the Ottoman Empire. It was but a small part of the campaign waged by the Turks against the Armenian nation during World War I. We now know that more than 2 million were killed, and we have labeled the whole episode the Armenian genocide.

The entire campaign was scarcely known to the outside world until Franz Werfel published this book. He conducted intense research, and wrote volumes about it. Musa Dagh was published in Germany in 1933, and met tremendous international acclaim. Werfel explicitly linked his book to his concerns about increasing Nazi persecution of Jews. Musa Dagh is still considered one of the most important publications of the 20th Century.

Such was the life of a book cover illustrator — you never knew what you were going to be given to read and represent in paint. As usual, I would love to know the whereabouts of the original artwork.