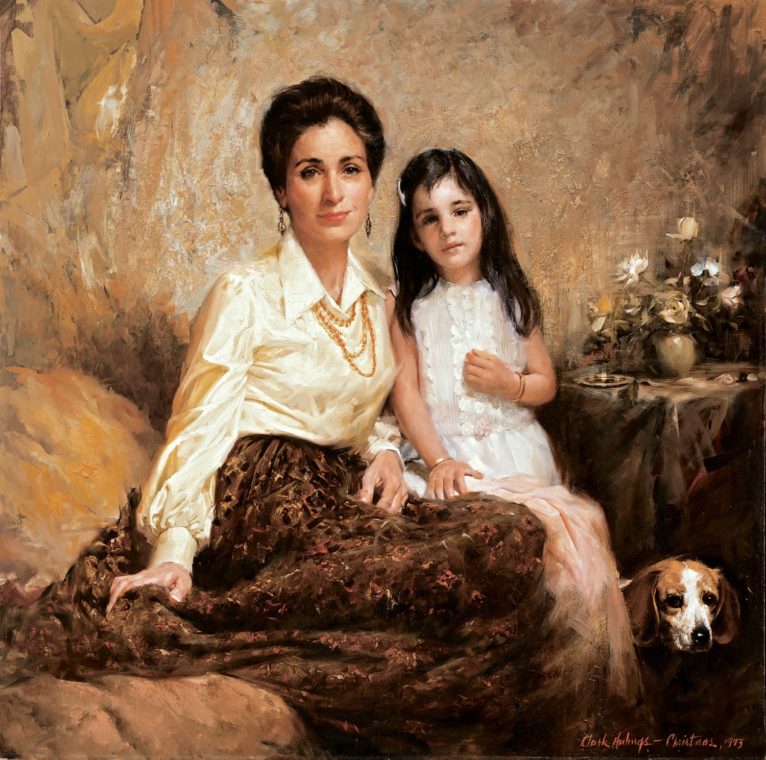 Happy New Year and happy birthday to my Mom!

This portrait is entitled “Mary, Elizabeth & Pauline”, but my father always called it “My Three Girls”. Pauline was the offspring of a beagle that he had given to his sister’s family. That beagle was named Cleopatra. My aunt has always named her dogs after famous queens. Pauline was a special dog. (Yes, I know, everyone says that about their pets!) She was really smart. For the first several years of their life together, she and my father lived in his Murray Hill bachelor pad/studio in Manhattan.

The two of them would take the train to Connecticut most weekends to visit his sister’s family and her mother. One Friday as they were walking to Grand Central Station a loud noise spooked Pauline and she bolted, running across the street mid-block under a taxi cab. My father ran after her, but to no avail: she was lost. He looked everywhere; he even went to the station, where he learned that, not only had she been there, she had navigated her way through the crush of commuters, up and down escalators and the conductor had seen on the correct platform to board the train to Westport! However, by the time my father arrived, she was gone.

My father was beside himself. He searched and searched for almost two weeks, and had pretty much given up when he received a call from an elderly woman who made it her business to help people in his situation. She asked if he had been to the pound. He said of course. She asked if he had explicitly demanded to see the room where they kept the pure bred strays. He replied that he had not known to do that, or that such a room existed. She was adamant; he returned to the pound and did as she had instructed. Reluctantly, they led him to the back, and low and behold, there was Pauline. Man and dog were reunited, and Pauline was part of our family another 12 years.