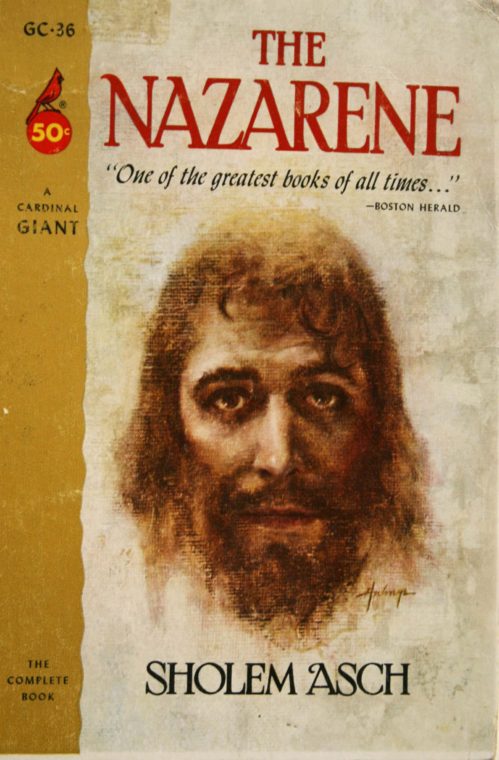 In honor of the Christian Holy Week, it seemed appropriate to focus today on this powerful illustration for the equally powerful book, The Nazarene by Sholem Asch.

Asch was an acclaimed Polish-Jewish novelist, playwright and essayist who wrote in Hebrew and Yiddish. He was celebrated internationally, particularly in his native Poland, in his adopted country, the United States, where he became a citizen in 1920, and in France, where he lived later in his life. His plays were performed on Broadway, in Yiddish, to rave reviews.

I’m not sure from my review of this novel that Asch actually does promote anything. He was writing great historical fiction that employed actual historical characters as a way of opening a window into life in the Near East at the birth of the first millenium AD. He also took the liberty of filling in many gaps in their stories with well-educated and entertaining written guesses. The Christian community lapped it up, even if the Jewish community called him a traitor. I invite you to check out the trilogy, and let me know what you think.

I would love to get a look at the original painting. I have no idea where it is today. My father painted it in 1956, for the Cardinal edition of The Nazarene. If you know where it is, please let me know.

In any case, my father clearly had little choice as to subject matter for the cover of this book! I don’t know who he used as a model, but he certainly captured a deep, haunted look in the eyes. The original was clearly oil on canvas, and the sepia tones and wispy tendrils at the edges that give way to the smoky, cottony background evokes dye seeping into cloth…like a shroud.