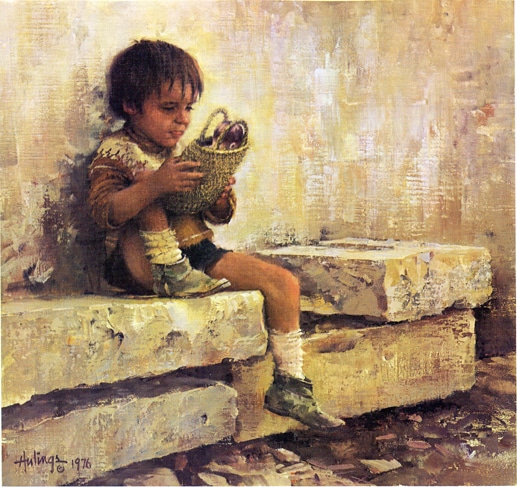 And a Little Child Shall Lead Them

This is one of my mother’s favorite paintings. A little boy holding a wicker purse. You’ll notice there’s a doll inside it. I’ve always wondered what he’s thinking — where did he get the purse? Is it his sister’s doll that he’s absconded with? Did he just find it on the street? Is it his own, and he’s having a conversation with it about whether it likes being inside that wicker? He is certainly focused, which is why my father titled the picture “Concentration.” He also seems happy, and pretty proud of himself. There’s a subtle smirk on his face. Clearly he’s up to something.

I appreciate this painting because it is so subtle. So many levels and layers, all accomplished with just slight changes of color and brushstroke. It’s amazingly complicated — a tour de force of technique. Everything hinges on the interplay of hard and soft edges, and on the delicate values. Many people who collect and study my father’s work consider the 1980s to be his strongest decade. I don’t know that I agree with that. This painting shows him in top form. Of course, I can point to Hulings’ paintings from several different decades that can equally make their case. I think my father produced spectacular pieces during every phase of his long career. They are just different, not necessarily better. He kept on evolving, and he worked quite hard at that.

My father came across this little boy in Central Mexico in the mid-70s, which means today he would be approaching fifty. How time flies.

As my own son has just headed back to school (yes, in New York school starts after Labor Day), and summer fun gives way to “how much can we get done before the holidays kick-in,” I thought this little gem struck the right chord. I hope all of your little boys and girls are fully engaged in harmless mischief of their own. And I hope that all of us can remember to save some time to focus on what’s really important to us in the midst of an ever-filled year.