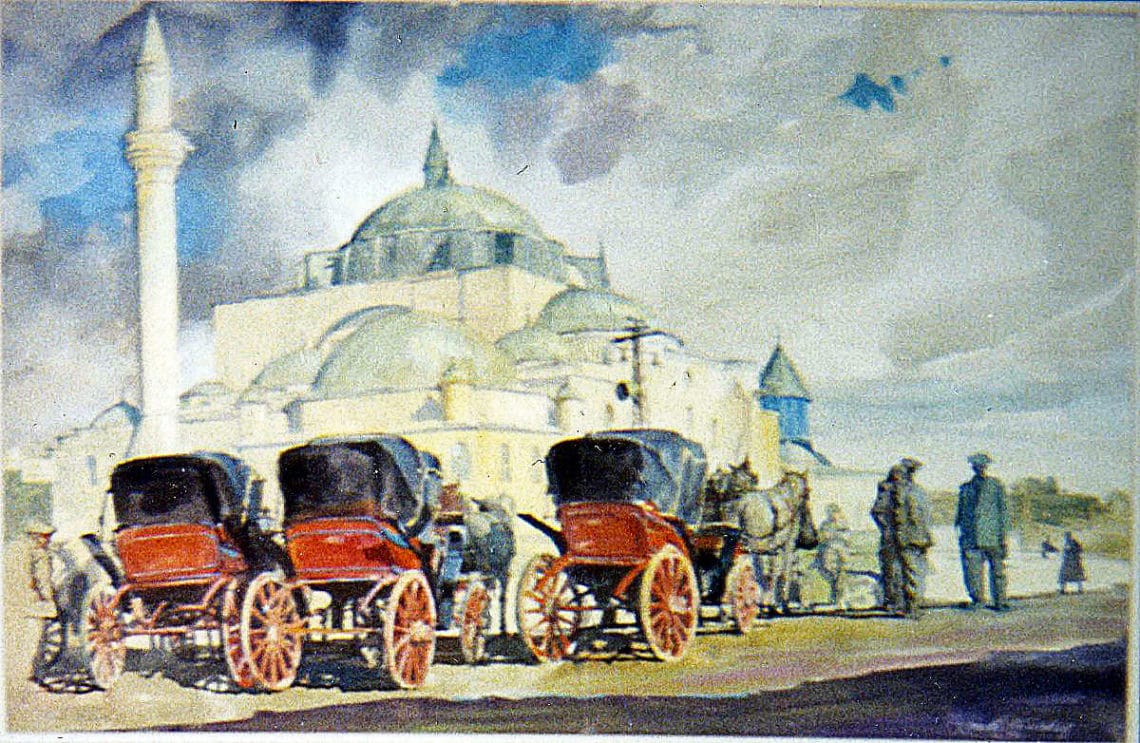 Here’s a lovely little watercolor of the Selimiye Mosque, in Edirne, Turkey. The mosque was commissioned by Sultan Selim II in the late Sixteenth Century, and was built by architect Mimar Sinan. To this day it is considered a masterpiece of Islamic architecture, and Sinan himself named it as the greatest work of his career. This is saying an awful lot, considering he was responsible for the creation of over 300 edifices, most of them large public structures built on the orders of three sultans, Suleiman the Magnificent, the afore-mentioned Selim II, and Murad III.

Sinan is one of the most influential architects in history. He was a contemporary of Michelangelo, and I enjoy thinking about him building Sultans’ mosques while Michelangelo was planning St. Peter’s Basilica far to the West.

My father visited Edirne, in far Northwestern Turkey, in 1959. Edirne was originally called Adrianople, after Hadrian, the Roman emperor who was in power when the city was founded. Edirne has been through upwards of 16 sieges and battles over the course of its two-thousand year history. During World War I the Selimiye Mosque received a direct artillery hit to its dome, but the building is so solidly constructed that it barely made a dent.

Nowadays there are no carriages in front of the mosque. In fact, there is now a setback curb, which keeps cars at a distance. My father titled this work very clearly as “Selimiye Mosque”, but he was working on-the-spot in watercolor, and only captured one of the tall spires. The mosque actually has four spires, one in each corner. He was there in November, it was cold and rainy, and he had a sinus infection. I assume those factors caused him to wrap up the picture without filling in all the details. Artistic license is sometimes driven by basic need, as opposed to vision.

This painting was sold out of a solo watercolor show in Tulsa, Oklahoma in 1964. Do any of you know where it is today? I’d love to have a better image of it.