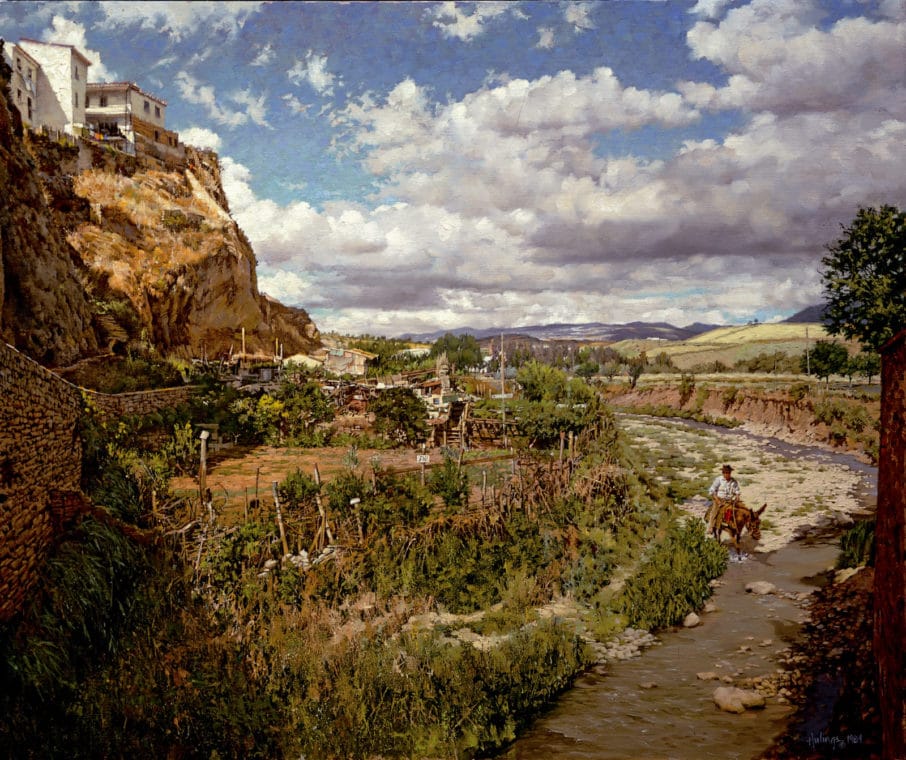 A Fortified Town Goes to Auction

My father first traveled to Andalusia in 1960. He had lived in Spain as a child, but did not venture to the Southern part of the country until near the end of his multi-year European sojourn, when he drove the entire length of the Iberian Peninsula, and spent a few months exploring the Costa del Sol and the mountainous interiors to it’s North. Having discovered the rich source material there, he was hooked, and I spent a good deal of my childhood roaming dusty Andalusian villages with my mother while he painted and gathered subject matter.

The 9th Century, moorish Old Town of Ronda sits on a mountaintop about an hour and a half east of Málaga. It is one of Spain’s oldest towns. As you can imagine from this painting, no matter how you approach it is tough-going, and this horseman might have the best strategy for reaching it, even today. As with hilltop villages all over the world, Ronda has a more easily accessible New Town adjacent to it, reachable by bridge across a magnificent gorge.

Here’s what my father had to say about this work: “This picture, composed on different levels, is a side view of the town of Ronda. Only a few houses of the town are visible, perched on the edge of a cliff. They are the nice houses of substantial citizens. Way down below is a shantytown of rude shacks made from scavenged materials, and a few steps down from them is a stream.

“Ronda is built on a mesa and one can easily see the protection it offered in ancient times against marauders. To me it offered a fine composition.

“The signs on the posts warn against trespassing. What little the people have they mean to keep – including their right to privacy.”

If you find yourself in Southern Spain, Ronda is well-worth a visit. This painting has been in a private collection since it left my father’s studio in 1984. on July 29 it will be on the auction block at the Coeur d’Alene Auction in Reno, Nevada.