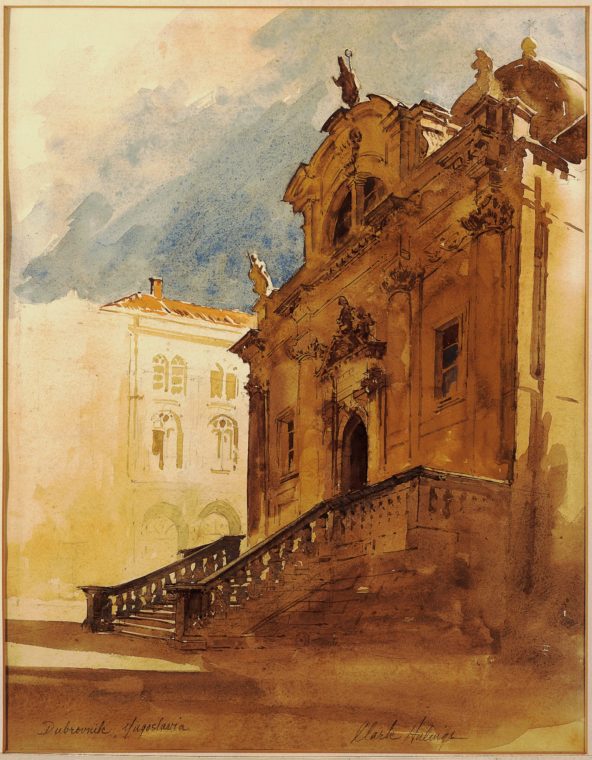 Anybody Can Do That!

Here’s a majestic watercolor of the Cathedral in Dubrovnik, Croatia. It was painted in 1959 while my father was wending his way south in his Opel from Vienna to Egypt. You can tell the era by the signature, which includes his full name and the location, written in ink. He only used this signature during those years.

What strikes me most about this painting is the light — Hulings was famous for his ability to capture light, and here he has managed it in a plein air watercolor.

Expert draftsmanship (rendering of complicated architectural elements) and strong judgement (his willingness to “under-paint” to achieve the effect he desires) are also on display. In fact, my favorite part of this picture is the unfinished wall on the left. To me it indicates that my father had accomplished his goal — he had worked out whatever was intriguing him, maybe the challenge of the sunlight and shadow, or maybe of the forced perspective to increase the grandeur of the church — so he left well enough alone. Or maybe he felt that less depiction of the other building would increase the focus on the main event – the cathedral. If so, he was certainly correct about that. At 14 x 12″, the painting seems much larger than it actually is.

My father was interrupted while painting this picture, so it’s also possible that he just never got back to that part of the composition, although I doubt that. I’ll let him tell you the story of that interruption in his own words:

“This particular watercolor was painted in the town square from a small alcove hidden off to one side. As I was working, I was interrupted by a beautiful statuesque elderly woman dressed in well-cared-for, pre-war clothes of classic design. With Victorian elegance and a slight arrogance, she addressed me in two or three languages before settling on English. She asked if I painted miniature portraits on ivory. She had a photograph which she wanted copied in oils onto a piece of ivory which could be placed in a locket. I said that I was sorry but I had no experience painting on ivory.

“She replied, ‘I am sorry, too. I’ve looked so long for someone to paint my miniature for me.’ And with that, she made a gesture of frustration toward this watercolor and added, ‘Anybody can do that!’”

This painting belongs to my father’s sister. She was living in Hamburg during the years when he was traveling, and he gave this watercolor to her upon his return to Germany in 1960.