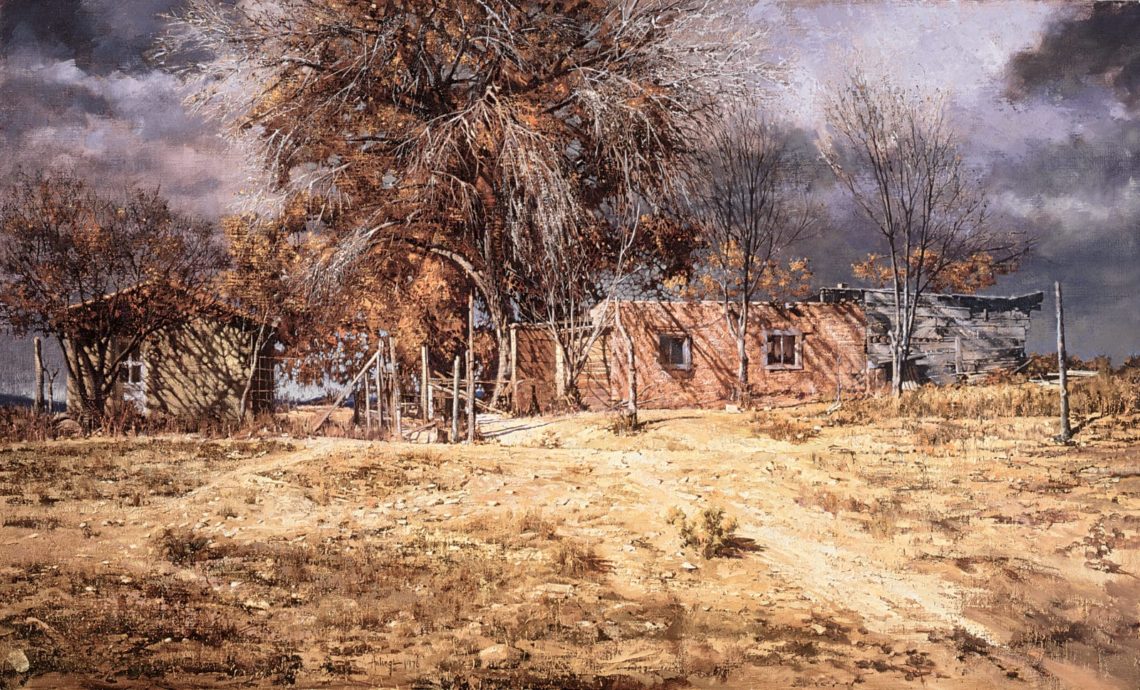 This scene is of Northern New Mexico. My father painted the “sketch” en plein air, and then used it and his photographs to create the larger work back in his studio. The difference in technique is clear, and I’m not sure which I prefer. There’s a great story attached to the paintings, which really gets to the kind of artist my father was, and the need for all of us to have independent counsel upon which we can rely from time to time. We get so close to what we’re doing that we lose perspective! I’ll let him tell the story himself:

“As I was painting this sketch of an abandoned adobe shack near Santa Fe, some dogs began to appear. Dog followed dog as I stood there working. They came out of the “deserted” little house and from around the back. There must have been thirty-five dogs. They weren’t vicious dogs. I held my ground and they exhibited curiosity rather than hostility. I continued painting, pausing occasionally to photograph them in different attitudes as they ranged across my scene.

“Later, in the studio, I enlarged the sketch to the finished picture shown here with the addition of about a dozen dogs and a black, moody Wuthering Heights sky to emphasize the eeriness and loneliness of the broken-down building. Eight or ten days of the time spent on the painting was devoted to those dogs – arranging them, rearranging them, painting them in, painting them out, altering my choices. But when it was finished, the picture didn’t please me. There was something wrong.

“Luckily, I have a couple of artist friends who are willing to apply their objective, well-trained eyes to an ailing painting and to come up with a diagnosis and a remedy. I called in one of these picture doctors and he spotted the trouble immediately. The sky and the dogs projected contrasting moods. I must choose between Emily Bronte and P.G. Wodehouse. Either the sky or the dogs must go. But my heart was set on both. I couldn’t give up the dramatic effect of the black sky, yet I hated to waste all the work and energy I had concentrated on the dogs. Besides, I liked them. So I thought to compromise. I began removing the dogs one by one, thinking, “Perhaps if I eliminate the dogs that are scratching and leave the ones that are sleeping or just staring, if I take out the ones that are growling at each other and the cute puppies…” In the end I was left with one menacing-looking Doberman. But even he destroyed the mood by suggesting human habitation, so I sent him off to join his companions. My picture finally fit its title.”

If you examine Abandoned Adobe under black light you will see all of those dogs lying around in their various positions. That could be confusing to someone who didn’t know the story and understand the artist’s process. As always, provenance is king!