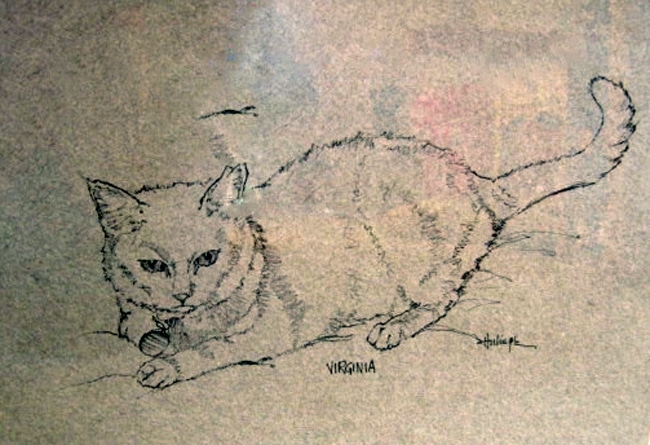 On June 9, 2007, we got an email from a lady named Ginny Brewer who was interested in learning more about an “etching” of a cat by Clark Hulings entitled “Virginia”. Her brother had purchased it at a charity auction to benefit the local animal shelter and had given it to Ms. Brewer because her full name is also Virginia. Wanting to know more about it, Ms. Brewer googled Clark Hulings and found us.

Well, to our knowledge, there has never been an etching made of any of my father’s work, so we were a little confused and concerned. We certainly didn’t want to have to tell Ms. Brewer that she had a fake on her hands! (We also wondered about a forger who took the time to copy a drawing of a cat instead of working on a bigger ticket item. Since then, though, we have been introduced to several other faux-Hulings drawings, so live and learn). You’ll also notice that the drawing is clearly under glass, and the photo I have includes the light reflected off of it.

To make matters worse, my father had no recollection of a cat with that name. Fortunately, my mother did. “Didn’t Gladys Heldman have a cat named Virginia?” she asked. “That’s right!” my father remembered, “and I did a little drawing of it for her to thank her for letting us use her indoor tennis court all the time.” Once Ms. Brewer sent us an image of the piece, we confirmed it was not an etching, but in fact the pen and ink drawing my father remembered.

To tie up all the loose ends, we contacted Gladys’ daughter, who told us that, after her mother’s death, she had donated the drawing to the animal shelter auction, where Ms. Brewer’s brother had acquired it. How nice that this pretty little cat started out as a present and ended up that way too. The only time it’s been sold has been for charity. I’m sure Gladys would appreciate that.