As Catalonia chafes under Spanish rule, it seemed a good moment to remind everyone of Iberian majesty and endurance. Onteniente is “Ontinyent” in Valenciano, a language one dialect away from Catalan. We are so fortunate to have our guest writer Elena Leshyn, who not only knew Clark and Mary Hulings, but, as you will read in her story below, has a lifetime of family connections to the town and the painting, Onteniente.

It All Started with A Print…

Sometime in the summer of 1988, when we moved from Barcelona, Spain, to Cincinnati, we took some prints to be framed at a local shop. My husband, John, spotted a beautifully framed print of an amazing painting, and called to my attention that the name on it was Onteniente. I was truly amazed, for Onteniente (or Ontinyent as it is called in Valencian/Catalan,) in the province of Valencia, was the town where my paternal grandfather, Vicente Ferrer Santamaría, was born! Needless to say, we bought the print. Since then, it has been displayed in our home: wherever home has been. After Cincinnati, we moved back to Spain — Madrid this time — in 1994, then to Torreón, Mexico, before retiring in Blacksburg, Virginia.

My father, José Ferrer Cortés, who lived in Venezuela, came to visit us often while we lived in Cincinnati; he was fascinated by the print. I remember him sitting in front of it telling me how he knew his grandfather, my great-grandfather had been the custodian of the “Iglesia de Santa María” (or Yglesia in old Spanish,) and wondered if the church in the foreground of the print could be it, or maybe it was one you can see in the distance on the left.

A Surprise Call from The Artist

Somehow, when we bought the print, I had missed that behind it there was a pocket that had a brochure about the painter, Clark Hulings. I did not notice it until the move to Madrid. It mentioned that he resided in Santa Fe. Curious about why he had painted that part of Spain, and wanting to learn more about the artist himself, I looked him up online and wrote him a letter. A few weeks later, to my surprise, he called me! He was so sweet to do so. He told me he had mailed me a book of his works,  A Gallery of Paintings by Clark Hulings, and, sure enough, I received it a few days later. Since then, we corresponded, and I always hoped we would meet someday.

I never realized my dream to take my father to Onteniente and Cocentaina for he died in 1994, just before we moved to Madrid. But John and I did visit those towns in 1998 before leaving for Mexico. We found out that that church in the foreground of the print was, indeed, the Church of Santa Maria. We walked around and saw the baptismal basin where, most likely, my grandfather and his siblings would have been baptized. I spoke with a priest and told him what I was searching for, but his answer was not very encouraging: all church records had been burned during the Civil War (1936-39.) 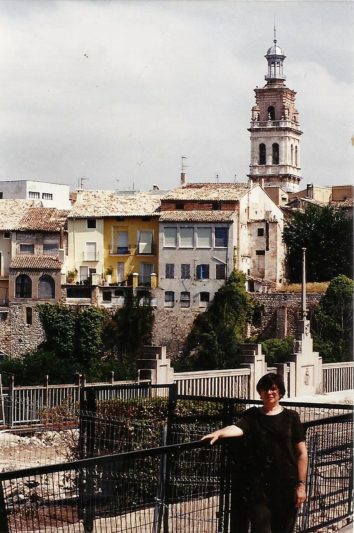 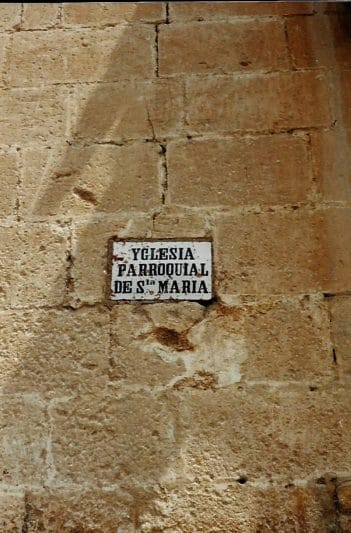 A Chance to See the Original Painting—Thanks to Mary Hulings

But the trip was not a waste of time. One of my questions had been answered, plus I got to stand not only where my ancestors had been, but also on the spot where Clark and Mary must have been years before, facing the place that inspired one of his masterpieces: my beloved Onteniente. Years later, in 2010, once we were back in the USA, we went to visit dear friends in Santa Fe. Before our trip, I contacted Mary and Clark and we made plans to meet. John, our hostess and I went to their lovely home one afternoon. But we were not to meet Clark. Due to an electricity outage the day before when he was scheduled to have some medical tests, they had to postpone them until the next day, so he was not home when we visited. Mary, very graciously, showed us the beautiful paintings in their private collection; several of them we had seen in the book Clark had sent me. I was in awe when I saw the original. Such a magnificent work of art! When Clark painted it, he could have not imagined that it would become such an important part of the life of a young (then) Spanish woman.

Passing Down the Generations: Abuelo to Alexandra and Beyond

Our print of Onteniente now proudly hangs above our fireplace in Blacksburg, and will remain with us if we ever move again. It has been admired by relatives and friends from all over the world, who have heard the story I just told you. It is in my will that it will go to one of our granddaughters, the only one my father met. Alexandra was a little girl when my father visited us in Cincinnati, and used to sit on “abuelo’s” lap when he was admiring the print. Perhaps someday her son, who is now an infant, will have it in his home and tell his children about the town of his Spanish ancestors, and also about the most-talented of artists, who painted it so brilliantly for the ages.

You can bring Onteniente home: we have two rare Onteniente Archival Prints at the Clark Hulings store on Etsy.