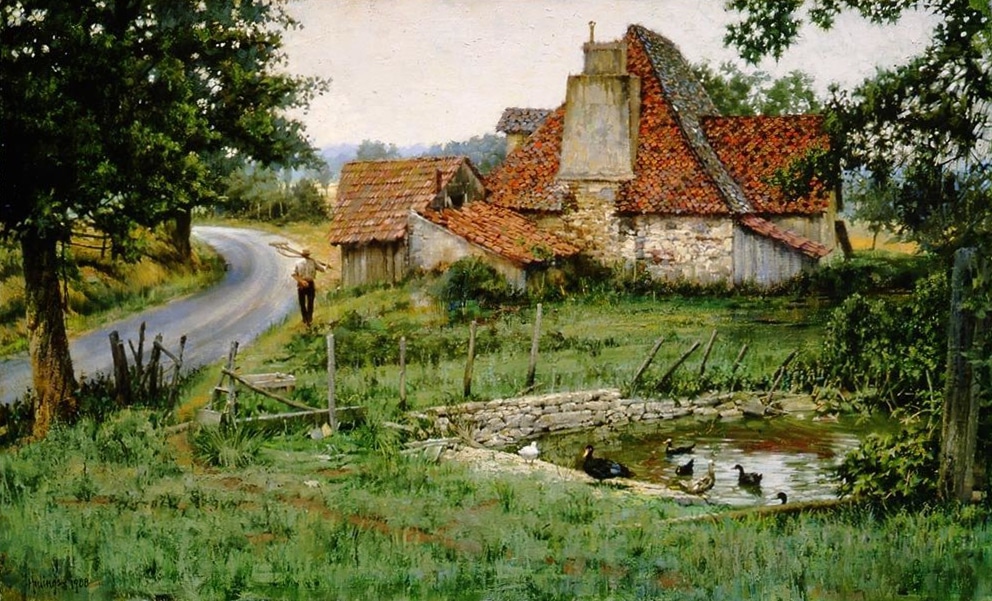 “He came closer and closer, grinning wider and wider, and started to unbutton his shirt!”

The hamlet of Escouderc, in South Central France, is three hours from anywhere. Escouderc is part of the slightly larger village of Saint Paul des Landes, which has a population of almost 2,000 people. My father thought it was just spectacular — a bonanza of subject matter. He spent many days exploring the area, and painted a lot of plein air sketches, as well as a few large studio compositions, of which this is one.

On the day he came across this scene (minus the ducks, which came from another country, and the pond, which came from his own imagination), he had left my mother near his easel on the side of the little road while he went to find a phone to secure their hotel reservation for the evening. (He didn’t want to quit without finishing the sketch he was working on, but they also didn’t want to sleep in the car that night.) After a while of waiting, my mother noticed a man approaching. A few minutes later she glanced up again and realized he was walking right toward her. As she was all by herself in the middle of nowhere, this made her a little uneasy. Still he approached, with a big grin on his face. He came closer and closer, grinned wider and wider, and started to unbutton his shirt! Her anxiety rose, but there was nothing to be done — it was too late to hide, and there was nowhere to run. Finally, the man stopped directly in front of her, pulled a plastic bag of perfectly ripe plums from inside the shirt, and dumped them into her lap. Then, smiling even harder and rebuttoning the shirt, he waved, turned around and went on his way.

That’s him in the painting, walking away down the little road. That ancient house is not his, because he walked right past it and disappeared around the bend. Once my mother’s heart rate had returned to something approximating normal, she enjoyed one of the plums and went back to her book. When my father returned, she shared both the story and the plums with him. And that’s what it was like to travel with Clark Hulings.

Have your own window to France: take a look at the very affordable signed archival prints of Ancient French Farmhouse at the Clark Hulings store on Etsy.